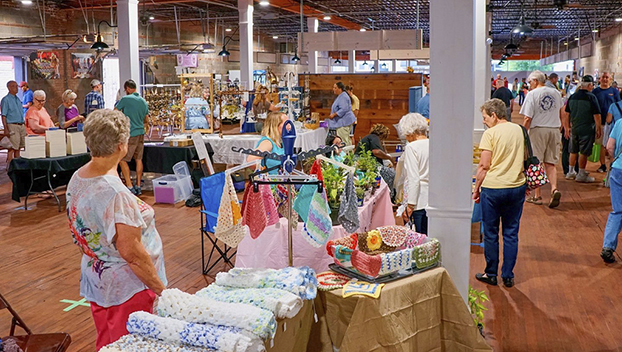 Despite the din, dust and the almost constant beeping noises created by dump trucks, earthmovers and jackhammers, Meg Howdy sees a Hallmark Christmas ahead for the Harbor District Market.

Even with the double whammy of COVID-19 and the streetscape project that has closed West Main Street since March, the Market is slowly returning to pre-pandemic traffic patterns according to Howdy, its executive director.

“There’s no doubt that the virus has affected us greatly, but we’ve hung in there and are starting to see more people on Saturdays,” Howdy said. “We knew the streetscape was coming, and the city has done a great job of keeping access points open so businesses could continue to operate. COVID took care of that for a couple of months when we were all closed, but we are starting to see more traffic as people feel more comfortable venturing out.”

Howdy said 1,200 to 1,500 people visited the market on Saturdays before the pandemic hit. Now, the average is closer to 500, but the vendors have returned, including several new ones.

“We waived the rent for all vendors while we were closed for six weeks earlier in the summer,” Howdy said. “I think that helped them come back, and I think they see there is light at the end of the tunnel with the streetscape. We know the virus will be around for a while, but we have enough space to practice social distancing, and we do make sure everyone wears their mask while they are in here.”

Making and selling masks are among the ways some vendors have pivoted to meet the changes in consumer buying habits. Yarn Chef Creations is one of three vendors that have face coverings available along with just about any crocheted item imaginable.

“I set up about a month after the market opened in 2019,” said owner Kathy Nolen. “Business was great during the holidays, then COVID shut us all down in the spring. It’s starting to pick up again, and I think we’ll have a strong holiday season once Main Street is open. It’s going to look wonderful when they get it done, so more people will come downtown and discover the market, maybe for the first time.”

Air conditioning is a major upgrade that won’t take full effect until next summer, but one that was badly needed. It was installed in mid-August and should help shoppers stay inside longer and vendors increase sales.

“The city did a major electrical upgrade as part of the streetscape and that allowed us to have AC,” Howdy said. “We can also now use a generator to help feed first responders and provide shelter if we have a hurricane or other natural disaster. We are also in the process of installing a sprinkler system for the first and second floor.”

Second-floor development is part of the Market’s Phase Two expansion. The upstairs runs about half of the first floor, which makes the building a total of 16,000 square feet. Plans include a training kitchen to be used in workforce development and a certified kitchen so vendors can prepare food onsite.

“We have stayed optimistic and kept planning for the future despite the challenges,” Howdy said. “It’s all about supporting local businesses. All the food we sell is grown locally. There have been a ton of craft shows canceled in our region, and we are attracting many vendors who still want to showcase their items during the holidays. Our musicians are returning, and we’ve seen more day-trippers from out of town. We are holding our Christmas market the first weekend in December, and we look forward to welcoming everyone back to our newly-finished downtown.”

A local manufacturing company is expanding its operations in Beaufort County, utilizing financial incentives from both state and local sources.... read more