A fall favorite, Pinetown VFD BBQ canceled due to COVID 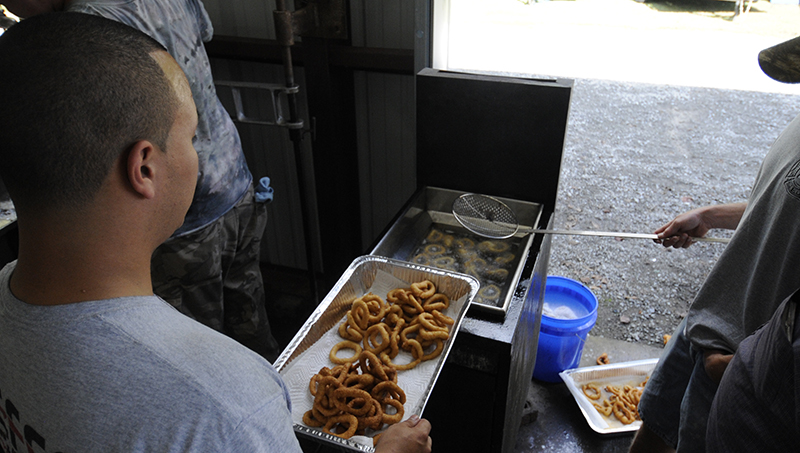 HUSHPUPPY HEAVEN: Members of the Pinetown Volunteer Fire Department await the completion of a batch of hushpuppies during a past barbecue fundraiser. Along with hushpuppies come potatoes, coleslaw and a choice of barbecue, chicken or a combination of both. (Vail Stewart Rumley/Daily News)

Barbecue fans will have to wait until at least next spring before they can enjoy the well-known culinary offerings of Pinetown’s Volunteer Fire Department. Their annual BBQ fundraising dinner, held every November since the year 2000, has been canceled out of an abundance of caution, so nobody is exposed to the still-spreading coronavirus.

“Between food-prep issues and people gathering, we are trying to keep everybody safe. We’re hoping the health situation will be somewhat clear by spring,” said Pinetown’s Fire Chief Fred Tetterton.

He added that the department will not plan another food-related event until next March, which has been the traditional month for the event’s spring barbecue. Plans are still in place to hold the department’s annual turkey shoot, scheduled for every Saturday night between Oct. 24 and Nov. 21, because “social distancing won’t be a problem and most of the activity will be outside. We are taking all those things into consideration.”

Proceeds from the spring dinner are used to increase the volunteer fire department’s building fund, as well as for building expenses and day-to-day operations. Earnings from the autumn event are directed toward insurance costs, equipment upgrades and maintenance, vehicle and equipment needs and workers’ compensation expenses. Tetterson said large capital purchases do not get met through these funds, but are usually covered by grants from the Office of the State Fire Marshal, which falls under the North Carolina Department of Insurance.

Considering that last year’s events sold a combined average of 3,500 barbecue plates at a minimum donation of $8 per plate, the department may have lost $28,000 because of these two cancellations. He added, however, that because most people give at least $11 per plate, the loss may be as high as $38,500.

“That doesn’t include proceeds from our bake sale, either,” Tetterson said, noting that, after expenses, each event usually accounts for between $21,000 and $22,000 for the department.

He said the annual turkey shoot, which brings in between $4,000 and $5,000, is not considered an “earner” for the department.

“It’s more of a community thing… just a place to come and hang out,” he said.

Tetterton said he has been flooded with comments from long-time barbecue fans who miss the fellowship as much as the slaw, potatoes, barbecued pork or chicken and the hushpuppies that are “always a big draw” at the event.

“We make sure they get their money’s worth, usually two meals from one plate. That’s what keeps them coming back,” he said. “This has been a great community gathering since 2000. It really just surprises us and makes us feel like we’re doing a good job to see cars lined up down the road packed with people waiting to come in and get their plates. It overwhelms and humbles us.

“All of us are definitely disappointed to have to cancel this. We are just trying to err on the side of caution and survive a little while longer from a monetary standpoint,” he said, adding that anyone who wants to make a contribution to the Pinetown Volunteer Fire Department may send a check to the fire house at 7262 North Boyd Road, Pinetown, NC 27865.