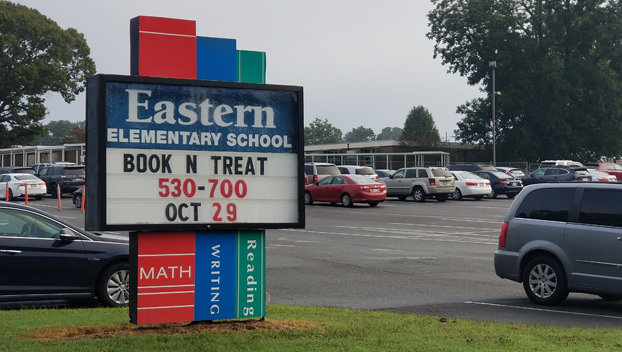 CHANGE OF PLANS: A positive COVID-19 case at Eastern Elementary School, coupled with close contact between staff members, means that pre-k and kindergarten students will remain on remote learning through Oct. 26. First graders will return to the classroom Thursday. (Matt Debnam/Daily News)

“Last week, we had a teacher inside the building who was not feeling well, received testing and ultimately turned up COVID-positive,” said BCS Superintendent Matthew Cheeseman. “After greater review, we recognized that teacher had been in very close contact with about eight other staff members, who were mostly teachers.”

Cheeseman said he learned of the positive test on Saturday morning. Because so many teachers would have to isolate because of close contact, he made the decision to hold off on bringing EES pre-k and kindergarten students back into the classroom until Oct. 26.

“Just to be very clear, we only had one person test positive,” Cheeseman said. “Because of the self-quarantine that you typically do when you think you’ve exposed, it then created a staffing issue in our pre-k and kindergarten classes. I made the decision to stay on remote learning because I did not feel, on the first day coming back, that the school would have enough substitutes in the building who would really know how to run the first day of school. It was more of a decision on staffing than it was about possibly having an outbreak or a cluster.”

“After meeting with the principal and first-grade teachers, as well as maintenance, transportation and school nutrition staff, I believe we are ready,” Cheeseman said Monday afternoon.

Because teachers at various grade levels tend to work closely with one another, Cheeseman said it would not be surprising to have another similar situation before the end of the school year.

“It’s all about preparation,” Cheeseman said. “Now that you have kids coming back, you have to anticipate that you’re going to have these scenarios. Just like Eastern, we’re going to learn how to deal with things a little bit better next time. … Of course, I hope it doesn’t happen, but we have to plan for it.”