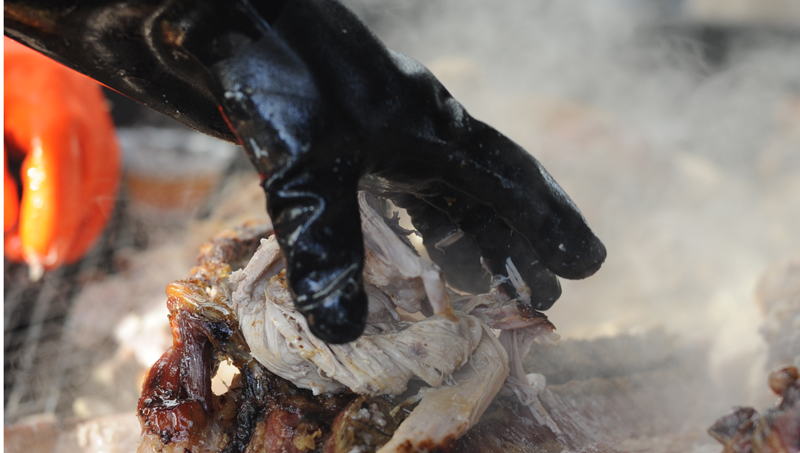 BELHAVEN — Pork is back on the menu in Belhaven this month, after a year of COVID and cancellations have largely hamstrung the 2020 Whole Hog Barbecue Series. From the evening of Oct. 23 to the early-morning hours of Oct. 24, the delectable aroma of whole-hog barbecue will fill the air at the inaugural Belhaven Breakwater Barbecue Competition.

“When Brownie Futrell let me know Smoke on the Water had been cancelled, I saw (Belhaven) Mayor Ricky Credle at a softball game the next afternoon, and he wanted to know about having a barbecue event in Belhaven,” said event organizer Evan Woolard. “I got on the telephone and within two hours, I had 25 teams.”

Two weeks later, Woolard had commitments from 45 of the top whole-hog barbecue cooks to come to Belhaven for the event. With 30 teams cooking on gas, and 15 using charcoal, the competition will draw participants from across the state, as well as Virginia and South Carolina.

After teams spend the night cooking their hogs, senior judges from the North Carolina Pork Council will sample and rank each team’s barbecue the following morning, beginning at 8 a.m.

At the end of the season, the cook who accumulates the most points throughout the season of competitions is declared the Pitmaster of the Year, a prestigious honor in the whole-hog barbecue world. But for Woolard, and many of his fellow cookers, the fellowship of the events is more important than the prize.

“On Friday night, you’re all excited and ready to see everybody you compete with,” Woolard said. “For most of these guys that cook, like myself, it ain’t about the money, and it ain’t about winning a trophy. That does play a part in it, but it’s more about the camaraderie, the family and the fun. Everybody can laugh and joke, and the next morning, when the judges come around, you’re still friends, and you’re going to look forward to the next event.”

Beginning at around 10:30 or 11 a.m. the next morning, the American Heritage Girls, a Christian scouting organization, will serve up barbecue by the pound and in sandwich form, each for $5. Proceeds from those sales will go toward the renovation of Belhaven’s Veterans Park and help the town install new signage.

The public is invited to watch the barbecue process Friday evening and view the judging Saturday morning at 8 a.m. Barbecue sales will continue until at least 2 p.m. Saturday, Woolard said. Also on the schedule for 2020, the Whole Hog Barbecue series is slated to return to Beaufort County on Nov. 13-14 for a 12-team barbecue cook off at Chocowinity Fire Department, dubbed Smoke on the Southside.