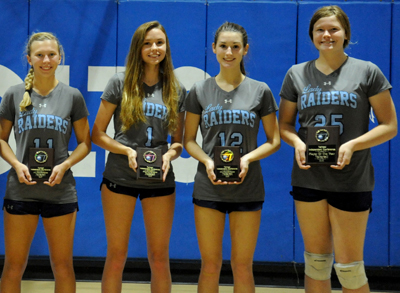 The Raiders (12-0) prevailed 25-23, 25-15, 25-13 to claim the conference cup once again. Sophomore outside hitter Reagan Stoop was named the conference player of the year and joined teammates Haley Elliot, Riley Cutler and Emma Williams on the All-Tournament team.

“We were nervous and super rocky in that first set,” said PCA coach Melanie Eddleman. “I was not pleased and let the girls know about it. We pulled it together the rest of the way and looked like ourselves. Our court coverage was better, we served better and had some strong kills to finish off points.”

Eddleman’s team has only lost one set this season, with the other 11 matches ending in 3-0 sweeps. In her first season last fall, the former Raider player led her squad to the third round of the 1A state playoffs with a 22-2 final record, making her 34-2 as a head coach.

The 2012 PCA graduate played volleyball and basketball for the Raiders, sports she now coaches. She graduated from Chowan University in 2016 and was working at the school when a position at PCA opened.

“I told them in my interview that this was where I was meant to be. I went here from kindergarten through 12th grade. My dad and brother graduated from here also, so it felt like home,” the Belhaven native said. “I teach high school science, middle school history and middle school P.E. It’s a bit odd working with some of the teachers who taught me, but I’ve loved every minute of it so far.”

The Raiders have gone on their undefeated march basically by themselves as no fans were allowed to watch the early matches according to NCISSA guidelines. Recently, two fans per player were able to watch home matches, but no supporters can go to road matches.

“That was the biggest adjustment for us, because we have great parent, grandparent, student and faculty support,” Eddleman said. “Thanks to one of our team parents (G.K. Pippin), we’ve had all our matches on Facebook Live. He’s done all the video work and given occasional audio commentary to keep fans updated with what’s going on. That’s been a huge help in keeping our fans involved.”

The Raiders will find out their state tournament seeding and first round opponent over the weekend when the brackets are announced. The NCISSA limited teams to conference only schedules this fall, so leading contenders are hard to identify. Eventual champion Kerr-Vance Academy of Henderson knocked them out in the third round last year, while Cresset Christian of Durham was the villain two years ago. Kerr-Vance won that year as well.

“We expect them to be strong again,” Eddleman said. “It’s hard to know who the favorites are because of the shortened season (12-15 matches instead of 20-24), individual players opting out because of COVID and some schools deciding not to play at all. We’ll keep our fingers crossed to host Tuesday and go from there either way.”

Eddleman has relied on her three seniors to set the tone this fall. All are captains and their versatility allow for flexibility on the floor.

“Emma Williams is the best setter I’ve seen in a long time and is a phenomenal leader,” Eddleman said. “Riley Cutler can set also, but we like her better in the back row. She keeps us loose during matches, but also knows when to be serious. Lauren Ricks is one of our outside hitters, but she can play other spots as well. She keeps us laughing and helps us relax.”

The Raiders, like all schools around the state, have dealt with an ongoing series of unprecedented, unforeseen circumstances this fall and the payoff is just around the corner. Or maybe, it has already been collected.

“We are just grateful to have a season,” said Eddleman. “Our girls are excited and ready to go. They know they have to hustle and earn their time on the floor. I tell them every day when they walk into practice to let go of whatever’s on their mind and focus on improving. We’ve done it so far and we look forward to what lies ahead.”