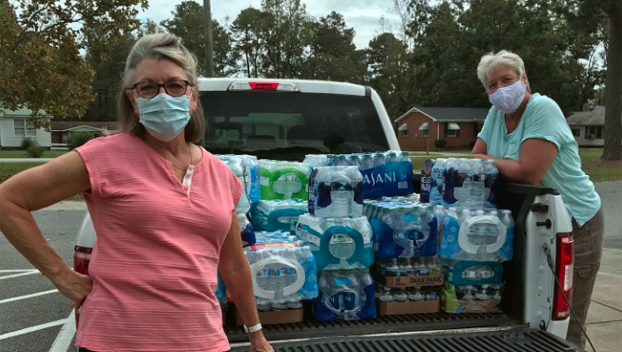 As students at Beaufort County Schools returned to the classroom last week, the latest in a long line of logistical challenges quickly became apparent. In a school environment, the potential spread of COVID-19 made the use of common water fountains a non-starter. But it didn’t take long for the community to step in and help solve the problem.

At S.W. Snowden Elementary School, administrators put out a message reminding parents to send bottled water with their children after the first day of school. Realizing that not all parents might be able to do that, school counselor Chynna Bonner reached out to local Food Lion stores in Washington and Chocowinity to see if they would be interested in donating water for the kids.

“Our community has been awesome,” Bonner said. “No one turned me down. They were like, ‘Yes. We want to help.’” 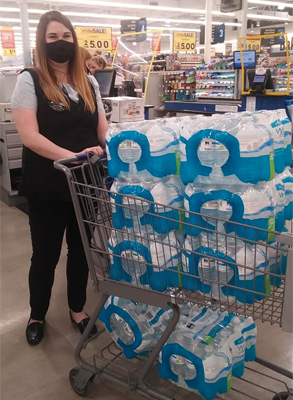 It wasn’t long before the school had 100 cases of bottled water for its students, helping them stay hydrated and alert. At the same time Bonner was seeking donations for Snowden, Chocowinity Primary School counselor Leslie Jones was seeking similar assistance for her students. In short order, the ladies of the Cypress Landing Women’s Club began a bottled water drive for kids at Chocowinity Primary School.

“They were able to bring out around 60 cases of water last week, and we’ve been able to give approximately two cases of water to each class, just to supplement for now,” Jones said. “They do a lot of other things for us, like help with our Angel Tree program every year and host a school supply drive for us.”

While those donations were specific to those two schools, the school system was also able to find a great deal from Lowe’s Home Improvement to help meet the needs of schools throughout the county. Thanks to the efforts of BCS maintenance coordinator Jamie Stokes, the school system was able to buy nearly 3,200 cases of water from the hardware store at a cost of approximately 10 cents per bottle.

“That was another local business discount,” said BCS Student Services Director Ashley Padgett. “Then Lowe’s is also donating a driver, a truck and a forklift to make water delivery to all the schools as well.”

Padgett added that Stokes is also looking into the possibility of converting all of the school system’s fountains into no-touch refill stations, which could allow student to refill reusable bottles while preventing the spread of germs.

To learn more about the needs of individual students at Beaufort County Schools, and their families, follow “Bright Futures Beaufort County” on Facebook.