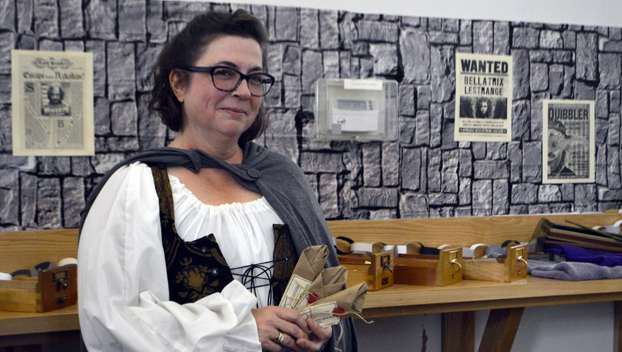 A world of magic and whimsy awaits at Brown Library later this month, as the Harry Potter Halloween returns for its second year. A sequel to last year’s immensely popular event, the Halloween festivities will transform the exterior of the library into a replica of Hogwarts, the fictional school of witchcraft and wizardry made popular in the books.

While last year’s event was held inside the library, the celebrations scheduled for Oct. 30 will be held in a drive-thru format to help prevent the potential spread of COVID-19.

“Last year’s event was very successful, so we definitely wanted to hold Harry Potter Halloween again,” said Brown Library Youth Services Librarian Terry Rollins. “But because the library is still closed to the public, except for curbside pickup, we batted around different ideas and decided we could make this a drive-thru event.”

As families drive their cars around the library, they will be greeted by library staff portraying characters and events from the books. Each child will receive a goodie bag to take home.

“We’ve been probably working for at least two months on this,” Rollins said. “Last year’s event was one of the most successful programs we’ve ever done at the library. With the enthusiasm and the great comments we got, we just decided we had to go ahead and do it again this year, so we’re happy we came up with the idea.”

Though the library has been restricted to curbside and online services for most of the year, Rollins says the staff there is finding ways to engage with patrons online, keeping longstanding relationships going in the face of a public health crisis.

“We’ve really learned to embrace virtual programming as fully as possible,” Rollins said. “Our numbers have indicated how people gravitate toward our virtual storytime each week, virtual youth programming and even adult programs. We’ve been really utilizing our Facebook presence, Instagram and the library’s website.”

Harry Potter Halloween will run from 4 p.m. until 6 p.m. Oct. 30. Participants will enter from the West Second Street entrance, working their way through the event to come out on Van Norden Street. The event is open to vehicles only, and bikes or walking through is not allowed.

Daycares and other organizations must call in advance to participate, and children must be present in each vehicle to receive goodie bags at the end of the route. Supplies are limited, and costumes are encouraged. For more information, call the library at 252-946-4300.