Raiders Tame Colts to Advance to the State Semi-Finals 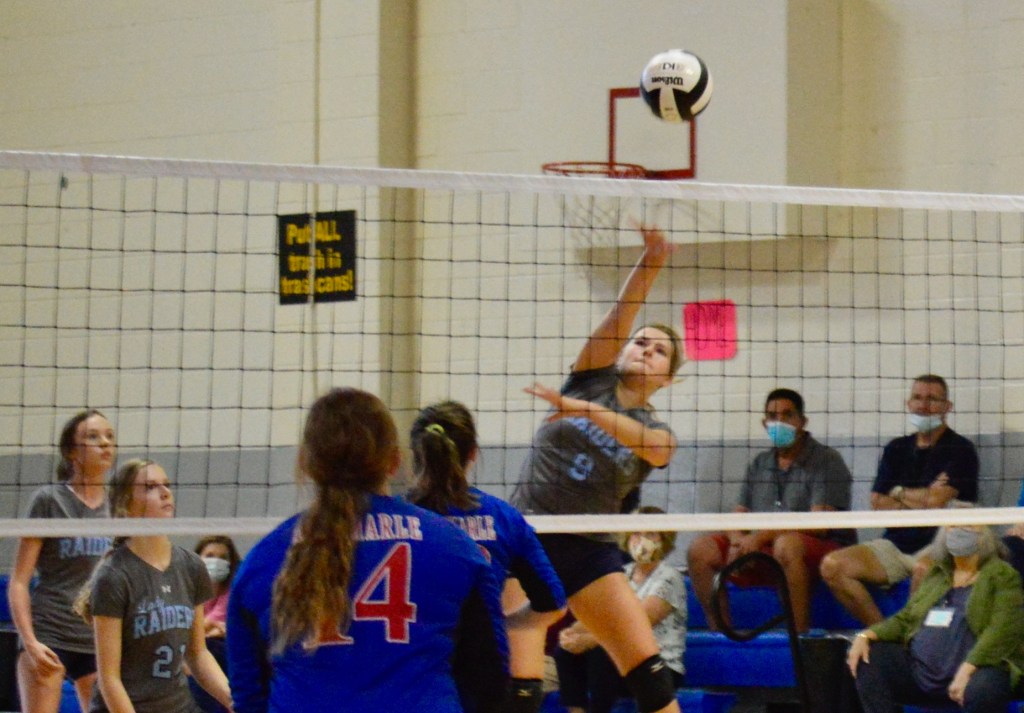 The Pungo Christian Academy girls volleyball team advanced to the semi-finals of the North Carolina Independent Schools Athletic Association 1A state tournament with a 3-0 sweep of conference rival The Albemarle School of Elizabeth City Friday evening in Belhaven.

“We were excited all day and very much ready to play,” said coach Melanie Eddleman, whose team raised its record to 14-0. We were very aggressive in attacking at the net and that made up for our serves being a little off, particularly in the second set.”

PCA jumped out to a 10-2 lead in the first set and Albemarle never recovered. The Colts did take an 11-9 lead early in the second set, but Eddleman called a time out to refocus her squad.

“We needed to regroup a little and we also needed to slow down their server. Our girls responded and things went our way after that.”

The Raiders battled back to tie at 12-12, then took the momentum when junior Haley Elliot served seven straight points for a 19-12 advantage on the way to a 2-0 lead.

Senior Emma Williams started the final set with seven straight scoring serves, but the Colts fought back to within 11-10. Two-time conference player of the year Reagan Stoop started serving at 15-12 and it was 22-12 when she finished, setting up junior Hannah Van Staalduinen to serve out the match.

I put her in so she could finish it for us,” Eddleman said. “We needed a contribution from everyone to win. Our seniors (Williams, Riley Cutler and Lauren Ricks) brought their usual leadership and understanding of the game. I heard them telling the others to aim for certain holes in the defense, which resulted in points.

PCA will travel to Sanford to meet Lee Christian School, the top seed in the West. The NCISAA split the bracket into East and West sides for the first time this year but will mix it up for the semi-finals. Kerr-Vance Academy, #1 in the East will host the West #2, Cape Fear Academy in the other semi-final.

“We’ve done well on the road so far and aren’t afraid to travel,” Eddleman said. “We’ll get back to practice Monday and be ready to go on Tuesday.”