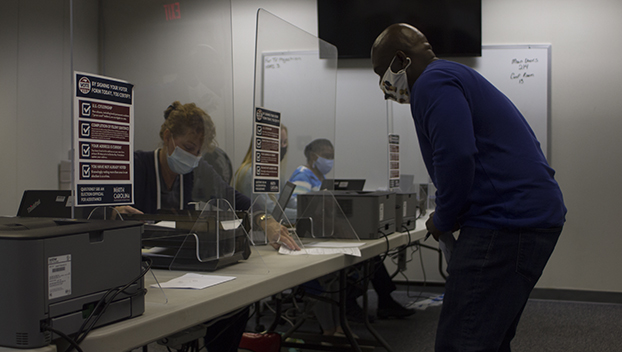 ONE-STOP: Poll worker Nancy Bowen checks in a voter at the Beaufort County Board of Elections on Tuesday. A record number of Beaufort County voters have already cast their ballots in the 2020 presidential election. (Anthony Comella)

Nearly 45% of all Beaufort County registered voters have already cast their ballots in the 2020 presidential election.

Director Kellie Hopkins said she’s never seen anything like it in the 22 years she’s worked for the Beaufort County Board of Elections.

“I think the pandemic has a lot to do with it, and I also think emotions are running high around this election. I think they just want to get it over with, so they’re coming in and voting just as fast as they can,” Hopkins said.

The total of 15,010 ballots had been received on Tuesday, with the following breakdown:

Hopkins said the turnout on the first few days of one-stop voting at the Board of Elections office resulted in longer wait periods.

“In talking with people, it was 45 minutes to an hour (wait) that first day. That was just an influx of people at the same time. Since then it’s been steady,” Hopkins said.

She said with five check-in poll workers, the BOE can check in voters faster than they can vote the long ballot, so voters will see about a five-minute wait.

Though 4,375 absentee ballot requests were made by Beaufort County voters this year, as compared to 576 during the 2016 election, Hopkins said she believes many of those ballots ultimately won’t be mailed in.

“I think there’s just a lot of stuff going around about how mail ballots would not count or they would be thrown out, so I think that is driving people to vote in person even though they requested a mail ballot. We are seeing people have asked for a mail-in ballot, but are choosing to come in and vote in person, instead,” Hopkins said. “Once a person comes in and votes in person, it cancels the mail vote.”

One-stop sites in Beaufort County are as follows: