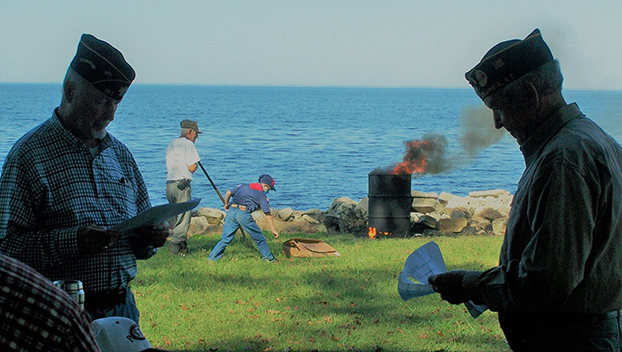 This morning [Oct. 24] at 1100 (military time) we honored Old Glory in her last days of service.   The members of The American Legion Scuppernong Post 182, at Norman E. Smith Legion Beach on the Albemarle Sound gathered to pay respects in a dignified and solemn way to retire all the tattered and worn United States Flags given to them over the last year.

Hundreds of flags that served their duty swaying in the breeze and standing tall on harsh sunny days were retired in this ceremony.

Mr. Leroy Spivey, Post Commander, welcomed everyone and thanked them for coming to share this experience on this bright fall morning in Columbia, North Carolina. Mr. Walter Davenport, Post Chaplin, said a prayer over our country, our troops, and our flag.

Boy Scout Troop 86 Scout Master, Mark Clough leading in a Hand Salute with Sam Clough, Cameron Clough, Hayden Clough and Braxton Clough, had the honor of raising the United States flag and leading us in the Pledge of Allegiance.

“I pledge allegiance to the flag of the United States of America, and to the republic for which it stands, one nation under God, indivisible, with liberty and justice for all.”

Standing at attention, we all saluted as Old Glory is raised to the top of the pole, swaying above us with the beautiful blue sky.

Emotions overwhelmed us as we all sang “God Bless America”.

Each tattered and torn flag was placed to be burned one at the time.  Puffy smoke rolled past us as the gentle wind blows and waves ripple on the sound.

This is the proper retirement for the United States Flag.  The United States Flag Code, Title 4, Section 8k states, “The flag, when it is in such condition that it is no longer a fitting emblem of display, should be destroyed in a dignified way, preferalby by burning.”

Most people retire their flag once it has become tattered, worn or faded. The American Flag can be washed or repaired to extend its life, if it is not in too much disrepair.

This was an emotional ceremony, thinking of all the events these flags have seen over the years they served.  Family reunions, graduations, weddings, babies born, children running underneath every day at school, flying high over our town bearing witness to our every day lives.

This is a poem that came to my mind as the flags were retired one by one.  My Service to Thee

” The sun and wind have caused me to become tattered and torn.  Think of happy, peaceful times, I do not wish you to mourn.

Please remember me, I’ve been with you every day.  Fold me tight with love and respect when you place me away.” By K. York

As the last flag was sent on to retirement and the smoke faded away, Mr. Walter Davenport led us in the benediction before we went our separate ways.