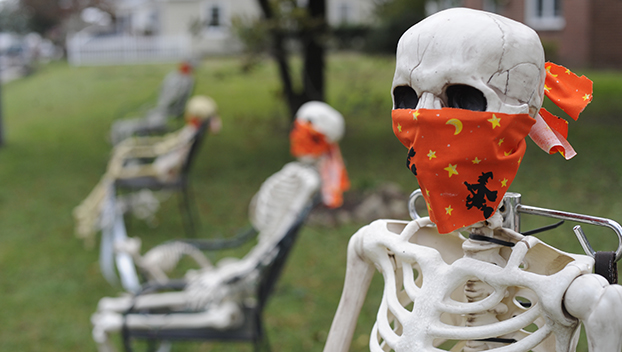 The Simmons Street home of Michael and Jane Alligood features a skeletal depiction of a COVID-aware Halloween.(Vail Stewart Rumley/Daily News)

The City of Washington is encouraging trick-or-treaters and their parents/caregivers to have a safe Halloween.

“We’re kind of leaving it to everyone’s best judgment, and we’re encouraging everyone to do it in a safe manner — wearing masks, hand washing/sanitizing,” said Washington City Manager Jonathan Russell. “We want everyone to participate at the level they feel comfortable.”

For some, that may mean not participating at all; for others, it may mean limiting participation to attending scavenger hunts or drive-thru options, such as Brown Library’s drive-thru Harry Potter-themed event Friday from 4 p.m. until 6 p.m., or doing the traditional trick-or-treating through neighborhoods known for their Halloween treats. With that, the City of Washington will be providing some guidance.

“We’re bringing on additional (staff) police officers to work on that evening to assist with pedestrian and traffic control,” Russell said. “The Main and Second streets area — that’s heavily traveled — as well as Smallwood, which can become heavily congested. It’s just to keep people moving in a safe manner.”

COVID-19 has had an impact on this year’s festivities, from cancellations to ingenuity. One Washington Park household, known for its “Texas Chainsaw Massacre”-inspired fright fest that’s brought hundreds of vehicles through the park on All Hallow’s Eve, has opted to wait until next year to resume the all-in-good-fun, yet scary, performance. On West Main Street, Keith and Gayle Hudson took a cue from the internet and attached a Halloween-decorated PVC candy shoot on the stair-rail from the front porch of their home to the front walkway to ensure social distancing, yet still deliver treats.

“It think we’ll see some ingenuity and creativity come out from some of our residents as to how to deliver candy (to trick-or-treaters),” Russell said.

Overall, Russell said he believes the pandemic will have an effect, but not too much of one, on the occasion.

“We’re anticipating the numbers to be down a little bit this year, but hopefully, it will be an opportunity for the kids to get out and be kids for a while, with everything going on with the virus,” Russell said.