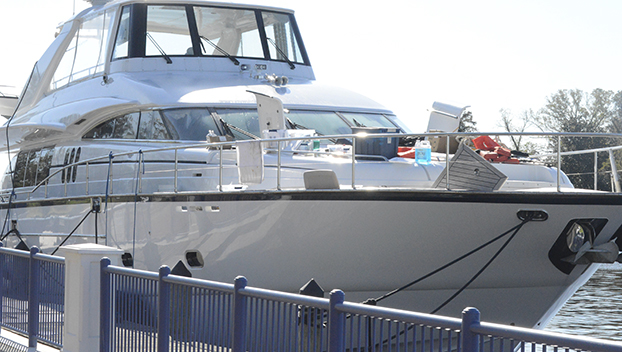 READY TO HIBERNATE: The 84.5-foot yacht named Impromptu pulled into the Washington waterfront docks over the weekend, maybe to stay all winter. (Steve Barnes/Daily News)

My Saturday morning exploration actually started Friday evening when my wife returned from her walk and mentioned that she saw a huge boat docked at the Washington waterfront.

She knew I had been on the lookout for the next big one that pulled in, and I was curious. However, I was also hungry, it was getting dark and my feet hurt, so I decided I would investigate further Saturday morning.

My F3 workout group meets at 7 a.m. at Mac Hodges Festival Park, so I was excited to see if the boat was still there. I am always amazed at how beautiful the Pamlico River looks as the sun rises, but this morning held an extra treat. The sun was coming up over the railroad trestle as the river widens to the east, while the moon was setting in a blaze of orange glory over the U.S. Highway 17 bridge to the west.

Our group of 15 men paused for a few moments in mid-exercise to take it all in. Right in the middle of this picture was one of the biggest boats I have ever seen up close. I have a decent vocabulary and command of the English language, but all I could muster was “That’s a big ol’ boat!”

Growing up landlocked in central Missouri, my awareness of watercraft was limited to the SS Minnow and the Love Boat. We did have lakes and streams, but my family did not descend from a long line of fishermen, so my nautical knowledge base still has plenty of room to expand.

The boat business is big business in Beaufort County, with nine boat builders calling our area home. Since I write business stories in addition to sports, I’ve tried to take advantage of every opportunity to learn more about seafaring vessels.

I noticed activity on the boat as our workout ended, so I hustled home as fast as my worn-out legs would take me, grabbed my notepad, pen and camera and headed back.

Turns out “Impromptu” sailed from the north shore of Long Island three days earlier for its trip south to be stored for the winter. The 84.6-foot yacht was made by Princess Viking back in 2006 and comes with four staterooms, each with its own bath and a Jacuzzi in the master. It’s fully equipped with all the bells and whistles except internet. Who could blame the owner for wanting to disconnect and enjoy the open sea?

I know all this because Capt. Vedis Terblanche filled me in. The only thing he wouldn’t tell me is who owns it. All he would divulge is that it wasn’t a celebrity. The cheerful 40-year-old South African lives in Washington and gets paid to steer boats up and down the East Coast. This particular client flew him to New York, then Terblanche picked up the yacht and piloted it south. How long it stays in Washington depends on slip availability. There could be an opening this week. If not, they will dock in Beaufort for the winter.

Terblanche has been piloting boats for nine years and has called Washington home for the last three years. He’s taken Impromptu to Florida and the Bahamas several times over the last year and a half and rates Nantucket, Newport, Rhode Island and Key West among his favorite stops with other boats. Bermuda is still on his must-see list.

Here’s the best part: the yacht is for sale. That’s right. All 84 and half feet can be yours for the low, low price of 2 million bucks. I told him I needed to check with my wife and get back to him.

Don’t fret if Impromptu is gone before you get down to the waterfront. Terblanche told me he would be going to Beaufort to bring in a 107-footer sometime in the next week or two.