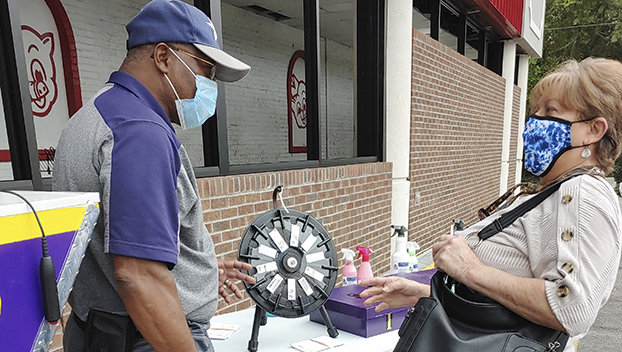 WINNER: Rita Williams (right), of Washington, showed up on Saturday morning to do some shopping and walked away with two gift certificates from a fundraiser to purchase holiday turkeys and hams for Zion Shelter and Kitchen. The fundraiser is held by Joseph Savage (left) at the Piggly Wiggly on River Road in Washington.(Karen Thiel)

A father’s desperate prayer over his hospitalized son has turned into a decade of love, gratitude and service for Washington resident Joseph Savage — as well as the staff and residents of Zion Shelter & Kitchen who have been blessed by turkeys and hams donated by Savage every Thanksgiving and Christmas since 2010.

“I was working, and the news came to me that my 16-year-old son, Admad, had been hit by a car while he was riding his bike. I prayed that if God gave back my son I would do whatever I could to serve Him better,” Savage said.

The doctor who examined Admad told Savage that his son would probably not survive flying 15 feet into the air and landing without a helmet.

“He was in the ICU for 10 days and rehab for another 15. He tried to pull out that breathing tube a lot, but Admad had no broken bones because God caught him mid-air and landed him down with his guardian angels. God gave Admad back to me. And I have kept my word to God,” he said.

About two years later, Savage became inspired to meet the needs of folks whose personal issues become magnified during the Thanksgiving and Christmas holidays.

“God laid it on my heart to help the homeless during those weeks, because lots of people fall into a depressed state then and, if they’re homeless, then they’re probably already depressed. A good meal uplifts the spirit a little bit. So that became a mission of mine,” Savage said.

As his faith and gratitude multiplied, so did the number of turkeys Savage could provide, as well as fundraising ideas that supply the cash for that culinary stash.

“I had 10 turkeys and no hams the first year, but it grew and stayed at 20 turkeys for a while. I added five hams about three years ago, and now I’m up to 30 turkeys and 20 hams at each holiday,” Savage said.

Savage said he’s donated his time, his smile and donations from generous businesses, civic organizations and individuals for the last 10 years so those homeless shelter residents will feel the love God has given to him on their behalf.

“I get donations and all these door prizes here in Washington, in Greenville and sometimes Williamston,” he said, referring to winnings available at an ever-growing assortment of creative games based on popular television shows, “so folks can play and receive a blessing while they’re donating to those homeless men’s holiday dinners.”

This year’s game tables include a separate section for pandemic-compliant sanitizer, gloves and masks. Savage said his immense gratitude to God is always followed closely by appreciative prayers for Wayne McKinney, owner of the Piggly Wiggly on River Road, who has allowed the fundraiser to operate there since it began. Savage said his goal this year is to be there from 1 p.m. to 7 p.m. at least three days a week until Dec. 19: “And then I’m going inside The Pig and shop for that meat!”