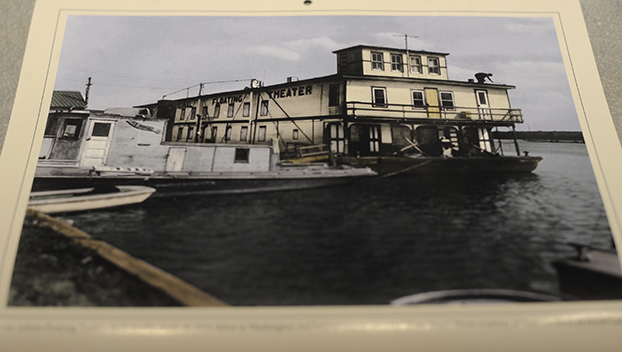 VIEW INTO THE PAST: The Historic Port of Washington Project’s new calendar includes plenty of old images depicting Washington of the past, which may or may not have been seen by local folks. Here, the James Adams Floating Theater docks on the Washington waterfront (above) and downtown Washington welcomes Shriners to town in 1936 (below). (Vail Stewart Rumley/Daily News)

Old and new don’t always get along, but in this case opposites attract. After six months and countless hours of research, layout and colorization, the Historic Port of Washington Project 2021 vintage photo calendar is a finished product.

The 12 photos, painstakingly reproduced, restored and repurposed represent a Washington and Beaufort County that most don’t recognize and some never knew existed.

“We thought it would be a neat, unique fundraiser during the pandemic,” HPoW President Ray Midgett said. “Our usual series of history talks to large groups can’t happen this year, so we came up with the calendar idea. We started selling them at the Harbor District Market last Saturday, and it’s been well received.”

Midgett was among a group of six volunteers who sorted through private collections, the State of North Carolina Archives, the Outer Banks History Center and even the Library of Congress to find 80- to 120-year-old photos that have not been widely displayed, or in some cases, ever seen by the public. The group culled the eligible photos down to a dozen and embarked on the most time-consuming aspect — restoration and colorization.

“We wanted to keep the integrity of the original photo but turn it into a high resolution image to bring out the colors and make it pop,” Midgett said. “Barbara Van Vliet is one of our volunteers who is a graphic designer, and she played a major role in the process. Photoshop helped a lot as well. The process brought a lot of things out of the background that you couldn’t see in the original photo. We are very pleased with the way it turned out.” 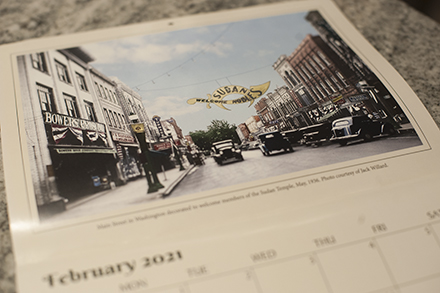 The group sold around 30 calendars on the debut weekend and hopes to move all of the 250 ordered. At $15, it’s a great way to learn about the past and help a local group.

Each month tells a story of how life was from the late 1800s to the late 1930s. February’s photo of Washington’s Main Street in May of 1936 seems particularly appropriate given that the downtown street will reopen soon after a month’s long facelift.

The scene looks east with just a glimpse of the Key Hotel, known to most as the old Belk building on the right side and the familiar Turnage Theatre sign ahead on the left. An odd-shaped yellow banner hangs across the middle of the road to welcome members of the Sudan Temple Shriners, who were in town for their meeting.

“That photo took me almost 100 hours to colorize,” Midgett said. “All the cars along the street had to be done just right, and I kept noticing things about the buildings and all the decorations that were strung up to welcome the Shriners. All the colors had to be in proportion to make everything look authentic. We were very careful to stay true to the original when doing all of them.”

Possibly the most interesting photo is saved for last. It depicts the James Adams Floating Theater, a 128-foot by 34-foot structure that looked like a riverboat but didn’t generate its own power. Tugboats had to tow it from place to place and there were many of those. It was built at Chauncey’s Shipyard, which stood on the Washington waterfront where Mac Hodges Festival Park is today, and inspired the long-running Broadway musical “Show Boat.”

“I enjoyed learning the when, where and why behind all the photos,” Midgett said. “I think there’s something here for everybody.”

Calendars are available at the Harbor District Market while supplies last. An HPoW representative will be available at the Market on Saturdays from 9 to 11 a.m. to answer questions and provide more information.