Army vet has a vision for his hometown 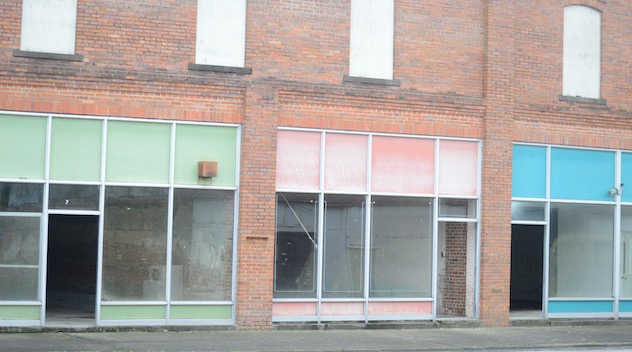 AURORA — Anthony Tyre might not be the only person in eastern North Carolina to own four buildings, but it’s a safe bet that he’s one of a select few to have two different people give him four buildings.

The 42-year-old U.S. Army veteran and Aurora native has taken on the daunting task of breathing new life into four long-abandoned storefronts on Main Street, adjacent to the Aurora Fossil Museum parking lot, across the street and just north of the Museum itself.

The buildings are connected by common walls, but are four separate spaces — three with second stories — and measure a combined 8,000 to 10,000 square feet. Three of the buildings are part of the old Cherry Hotel, which locals say dates back more than 100 years. The structure closest to the museum’s fossil digging site was built later as a single-story grocery store.

The corner space, most recently occupied by Helig-Meyers furniture store is the only one Tyre doesn’t own, but he’s working on it.

“I remember walking down Main Street when I was a kid, and there was something going on,” Tyre said. “I’ve always felt a strong connection to this community, and I want to bring that activity back. It’s going to take time and patience, but I’m planning on it being really good when it’s finished.”

Tyre joined the Army after graduating from Aurora High School and was awarded a Bronze Star for his service in Afghanistan. He got his undergraduate degree in Criminal Justice while serving, retired after 19 years and earned two master’s degrees in mental health counseling and vocational therapy from North Carolina Central University in Durham. He is the owner of Clear Point Family Services in Washington, a division of the Eastern Community Care Foundation, which he founded.

“Our job is to help families overcome their struggles with addiction, depression, housing, access to food or whatever they might need,” Tyre said. “I see the building project as a continuation of serving my community.”

The four buildings were filled with junk just a month ago. Now, they’ve all been cleaned out, thanks to a grant from the Kate B. Reynolds Charitable Trust. Some had been vacant for years after being used as a U.S. Post Office, ABC store, general store and various other retail outlets before decay and neglect set in.

Aurora resident Leslie Mills created the Footprints Teen Center in one of the spaces. She ran the nonprofit for more than 10 years before health concerns forced her to close. She and Trye met in 2015 through fellow Auroran Barbara Jones, who taught Tyre way back in elementary school.

“Anthony was in one of my first classes and was a good student,” Jones recalled. “He was quiet and polite, and we’ve stayed in touch over the years. It’s neat that one of my former students cares enough about the community to try to improve it. This type of project fits his personality, and I know he’s in it for the long haul.”

Tyre plans to start renovating the old teen center first and turn it into a farmer’s market or co-op grocery store.

“I envision a place where the community can meet, sort of a hub, like the Piggly Wiggly used to be before it closed,” he said. “I want to give local growers a place to sell fresh produce and other crops to local families. The next step is to get an engineer in here to do a safety inspection and tell us what we need to do to get it up to code. I know it will take some time, but I’m excited that we’ve started the process.”