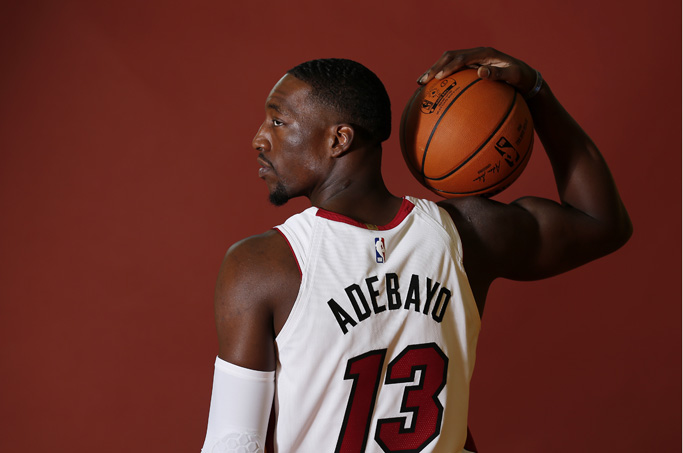 GAME FACE: Former Northside Panther and current starting center for the Miami Heat, Bam Adebayo, takes a posed photo prior to the 2019-20 NBA basketball season at American Airlines Arena at the Miami Heat's media days. Adebayo was selected to represent Team Giannis in the 2020 NBA All-Star Game. NOTE TO USER: User expressly acknowledges and agrees that, by downloading and/or using this photograph, user is consenting to the terms and conditions of the Getty Images License Agreement. (Photo by Michael Reaves/Getty Images)

The 23-year old first time NBA-All Star signed a five year contract extension with the Miami Heat that will pay him a minimum of $163 million over the next five years starting with the 2021-22 season. The contract will be worth $195.6 million if he makes the All-NBA team, wins the Defensive Player of the Year or Most Valuable Player award.

Adebayo helped the Heat to the NBA Finals for the first time since 2013 before losing to LeBron James and the Los Angeles Lakers in six games. Along the way, he posted the best numbers of his three year career, averaging 15.9 points and 10.2 rebounds per game and established career-bests in most statistical categories.

He won the Skills Contest at the All-Star game in Chicago and recorded 28 points, 19 rebounds, seven assists and three steals in 36 minutes against the Atlanta Hawks on February 20th becoming the first player in NBA history to achieve at least those totals in the fewest minutes.

“He put in so much extra work when he was here that nothing he does now surprises me,” said Bath Elementary Principal Charles Clark, who was principal at Northeast Elementary and Northside while Adebayo was there. “He would stay after practices and games to shoot extra free throws and to work on the other things he needed to do to improve. He is a phenomenal young man who is reaping the rewards of the work he put in.”

Adebayo put up 32 points and 21 rebounds a game for Northside his junior year, before transferring to High Point Christian Academy for his senior season, where he averaged 18.9 points and 13 rebounds a game on the way to being named North Carolina’s Mr. Basketball.

He played one year at the University of Kentucky before the Heat drafted him 14th overall in 2017.

Adebayo moved at a young age to Pinetown from Newark, NJ with his mother, Marilyn Blount to be closer to her family. Home was a single-wide trailer with a basketball hoop in the yard. His mom worked several jobs, including at the Acre Station Meat Market to make ends meet and moved to Miami with him after he was drafted.

He told the Associated Press in September that signing the richest contract in Heat history will help him return the favor.

“I think about how she fought through struggle. You see that for 18 years straight and you take that load on and feel that responsibility. My responsibility is to provide for my mom and the best way to do that is to help us win. To know that she is set for life is a real stress reliever for me. Just being able to generationally change my family’s life and also being able to take care of the people around me is a big deal to me.”