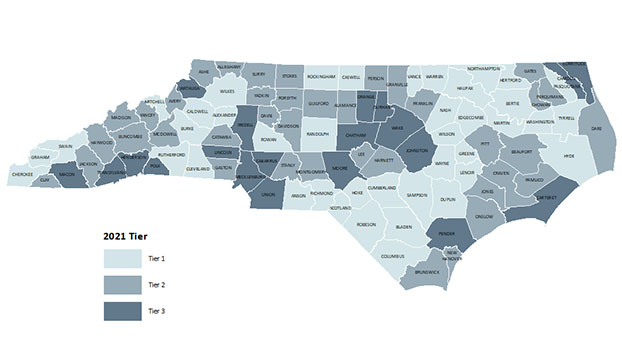 Silver linings haven’t emerged from the COVID-19 cloud very often, but Beaufort County has advanced from among the most economically distressed North Carolina counties to among the less distressed according to the NC Commerce Department’s latest rankings.

Essentially, the county has moved from the bottom 40 counties to the middle 40 on the state’s three-level ranking scale. The 20 most prosperous counties make up the top tier.

The state uses four factors to the determine the rankings that have been used since 2007 to define which counties should qualify for more state economic development funding. They include the average unemployment rate from October 2019 to September of 2020, median household income from 2018, percentage of population growth from July 2016 to July 2019 and the adjusted property tax base per capita for 2020-21. All factors use the most recent data available.

Stable overall employment during COVID-19 was the main reason Beaufort County moved into the middle tier, while more tourism and hospitality centered counties like Buncombe (Asheville), Brunswick and New Hanover (Wilmington) dropped to the lowest tier because of higher unemployment.

“Our rate of 5.8 is actually a point higher than last year, but we moved up because COVID affected other places more,” County Manager Brian Alligood said. “Tourism is certainly important to us, but we are fortunate that we have a broader economy that has held up pretty well overall during the pandemic.”

Beaufort is one of eight eastern counties that moved up, along with Camden, Carteret, Chowan, Jones, Onslow, Perquimans and Pitt. Brunswick and New Hanover were the only two that declined in the east.

Wake, Durham, Orange, Mecklenburg and the mountain counties of Macon, Transylvania and Watauga (Boone) are among the top 20 in the state.

“It would not surprise me if we dropped back to a Tier One next year after COVID clears up and the hospitality industry recovers,” Alligood said. “We are still well-positioned either way and the perception that we have a stable, resilient economy will certainly help us as we continue to recruit new businesses. It’s always better to be less distressed.”

2018 was the first and only other time Beaufort County appeared in the middle tier. County Economic Development Director Martyn Johnson thinks this year’s rebound is part of a continuing trend.

“We’re growing into a better overall economy while not concentrating on any one area. We are not primarily based on services, which COIVD hit very hard.” Johnson said. “Our manufacturing base continues to grow and diversify. We have several air filtration manufacturers and boat builders in the county. COVID has caused the market for high efficiency filters to expand rapidly and boating has become an escape for families who couldn’t travel.”

The counties 5.8 unemployment rate thru September was the 26th lowest in the state. Beaufort ranked 33rd in the property tax base category, 52nd with a 2018 median household income of $46,411 and 76th in population growth after losing 0.09 percent, which equals about 45 people, from July 2016 to July 2019.

Averaged together, the four factors mean Beaufort ranks 56th out of the 100 counties in the state.

“Any improvement is positive when it shows the county in a better light because it gives us a stronger hand to play in business recruiting,” Johnson said. “It also re-enforces the growing perception that Beaufort County is a great place to live, work and play.”