School board votes on temporary move to remote learning 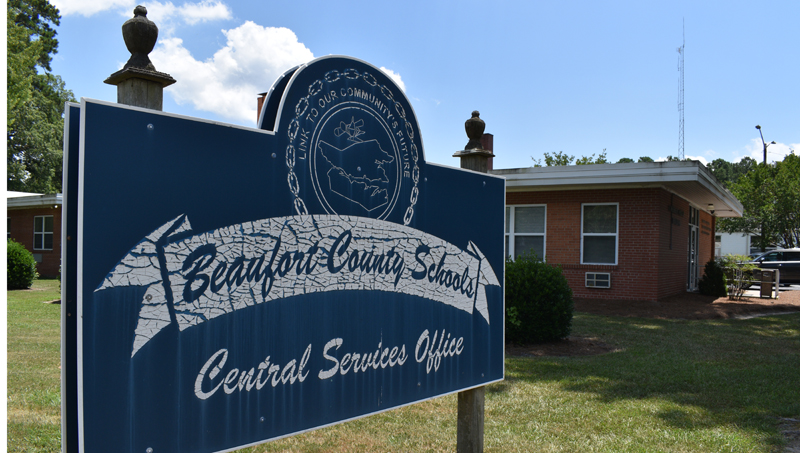 After a lengthy discussion Tuesday night about how to approach the start of the new semester in January, a 4-4 vote by the Beaufort County Schools Board of Education stopped a motion to have all students learn virtually for the first two weeks of the semester.

Instead, the district will continue to handle spikes in COVID-19 cases on a school-by-school basis. If any particular school reports a spike in coronavirus cases over the holiday break, Superintendent Matthew Cheeseman said he will use input from the school board to decide whether or not to temporarily switch all in-person classes at that school to online learning.

The idea of having all grades start the semester with two weeks of virtual learning stemmed from concerns about a potential spike in COVID-19 cases following the holiday season. Eltha Booth, E.C. Peed, Terry Williams and Vice Chairman Michael Bilbro voted in favor of starting the semester with virtual learning, while T.W. Allen, Butch Oliver, Terry Draper and Chairwoman Carolyn Walker voted against that motion. Board member Mac Hodges was absent from the meeting.

Walker was the last board member to cast her vote. She said she’d spoken to teachers, staff members and families about moving to virtual learning.

Several board members and principals spoke about the importance of athletics, and how those activities would be affected if in-person learning weren’t conducted at the start of the semester. Southside High School Principal Rick Anderson noted that if a suspension of athletics corresponded with the potential temporary shift to virtual learning, local teams set to start play in January would have their truncated seasons cut down even more.

“That seems like maybe a lame excuse to elementary schools that don’t have athletics,” Walker said. “But sometimes that’s the only reason your kids are coming.”

“We saw what happened after Thanksgiving — people are still going to gather,” Walker said. “We cannot police the actions of our adults, nor do we really want to.”

In other business, the school board voted unanimously in favor of shortening the scope of a remote-learning policy known as the “10-rule” to five days, as well as expanding that policy to also include students taking in-person classes.

According to the N.C. Department of Public Instruction, a student can’t be marked absent on a remote learning day solely because they didn’t log into their online lesson on that particular day.

Each online class includes a daily announcement, which is an activity students complete in order to be marked present. The district’s original remote learning plan, which was crafted and submitted prior to the start of the current school year, states that teachers must count a student present if they miss an online class but complete that day’s announcement within 10 days — the maximum amount of time teachers were originally granted access to change attendance records in the PowerSchool application.

Cheeseman said that, in addition to the time restraint on PowerSchool, the 10-day timeframe originated from the district’s need at the start of the school year to distribute assignments and supplies to students who didn’t have internet access at that time. He said a survey of BCS principals last week revealed that there are now just 13 students within the district who need those accommodations.

Concerns remained about how in-person students are graded in comparison to remote-learning students, as well as the amount of assignments teachers receive near the end of each attendance-tracking period.

“Y’all handle the attendance however you want, that’s not my issue,” Williams said.

“My issue is I want the face-to-face [students] to get the same break that the [remote students] do.”

“I really still struggle with the work dumping that’s happening to our teachers,” Walker said. “On day five, they get everybody’s work in.”

“So, the behavior of teachers is what drives the behavior of students,” Cheeseman said. “If a teacher assigns some type of lesson, and then chooses not to collect that later on, not to assign a penalty, that’s on the teacher. The principal looks at the totality of the grade. The teachers are charged with documenting the grades.”