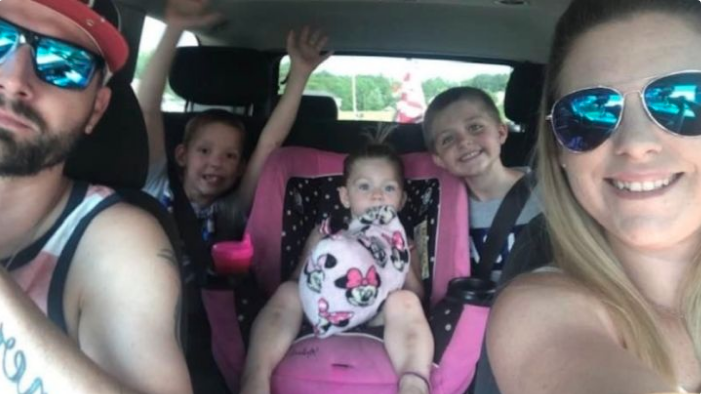 This photo of the Everette family is included on the family’s GoFundMe Page. Approximately $52,000 has been raised so far to help the family after several of them were involved in a deadly car crash.

More than $52,000 has been raised on the online platform GoFundMe to support the Everette family after a car crash Monday that killed 9-year-old Brayden Everette of Washington, mortally wounded 2-year-old Kennisyn, and hospitalized two others — 6-year-old Talon and Linsey, the children’s mother.

The accident happened at approximately 12:30 p.m. on N.C. Highway 33 near Grimes Farm Road in Pitt County, according to a N.C. Highway Patrol collision report. Linsey Everette was driving east on the highway when she veered left into the westbound lane and collided with another vehicle.

Kennisyn suffered a severe brain injury and was on life support until Wednesday, according to the family’s GoFundMe page.

“Kennisyn was deemed not to have any brain activity left and the family made the difficult yet courageous decision to donate her organs,” wrote Stacie Everette, the childrens’ aunt. “We find comfort in knowing that something positive will come from this tragedy as our loss will save the lives of another child/children.”

Kennisyn’s organ donation had an immediate impact. After being surgically removed Thursday, four of Kennisyn’s organs were transplanted to three different children.

“One of which is a little girl from Ohio who we were told would not survive another 24 hours without a new heart,” Stacie wrote. “While we are heartbroken and mourning the loss of Kennisyn it is also an amazing feeling to know that she will continue to live on (through) these other children.”

Talon suffered a fractured pelvis and a spleen laceration. The family expects him to make a full recovery. Linsey suffered two broken hips, several broken leg bones, a liver laceration and a bruise on her brain, and is also expected to have a full, albeit lengthy, recovery.

The family’s fundraiser, which can be found by searching “Everette Family Fundraiser” on GoFundMe, is getting closer to its target of $60,000. Just over 670 users had donated to the fundraiser as of Friday afternoon.

“Please continue to keep us all in your prayers as we attempt to move forward and heal,” Stacie wrote. “Thank you once again for all of the support and donations. We have been overwhelmed by the support thus far. May God bless you all!”