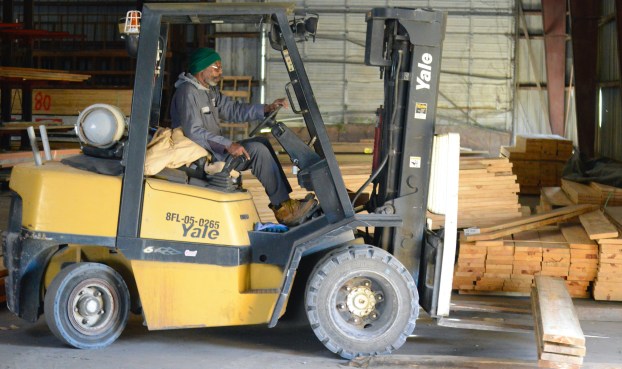 UPLIFTED: William Boyd has worked at the Water Street lumber yard for several employers over the last 45 years. He’ll move with the other workers to the new site off of 264 East in February.

This time next month, the last stack of lumber is scheduled to leave the corner of MacNair and Water Street, ending an industry era that was largely responsible for Washington becoming a town in the first place.

Builders FirstSource, the last of several lumber-related businesses to operate out of 515 E. Water St., is moving to a new site on 264 East that the Auction House most recently occupied, to make way for the second phase of the Moss Landing development.

Ironically, Builders FirstSource sold the materials used in the first phase and will continue to supply products for the second, while stepping aside in the name of progress.

The site dates back to at least the 1890’s when Moss Plaining Mill operated its sawmill on the banks of the Pamlico River, joining Kugler & Son, Havens Mill, and Eureka Lumber Company among others, to form a thriving local industry.

Builders FirstSource took over in the early 2000s, two years after the nationwide company began. Washington is one of the smaller locations of the over 400 outlets across the country and was a target for relocation.

“We weren’t surprised when the word came about the land being sold, but it was the nudge we needed.” local operations manager Billy Thompson said. “We were a little surprised when our regional boss called and asked what we thought about moving to Morehead City or New Bern.”

The 15 employees, some who have worked there 30 years or longer, weren’t that excited about moving, so Thompson and general manager Shelton Hall started scouting local locations.

“We probably spent 15 hours driving around town looking for the perfect spot and the Auction House fit the bill, but we didn’t think it was available,” Thompson said. “One of our customers had a friend who knew the owner and put us in touch. He said it was available and the rest is history. We are extremely excited about being in a newer, nicer location where our customers will have much easier access. It is a bit ironic that we are moving because a project we helped build is expanding, but we’re happy with the way things worked out.”

Thompson said it was a continuing challenge for big trucks to negotiate the Historic District’s narrow streets if they could find the location in the first place.

“We hear it all the time that our drivers GPS takes them to the MacNair entrance when they should come in on Brown,” Thompson said. “It’s tough to drive an 18-wheeler down here with cars parked along both sides of the road. It will be much easier for the trucks to make deliveries right off of 264 and we’ll have much more storage space.”

Thompson said the new warehouse is 12,000 square feet and there’s over three acres in the back for storage sheds. He said the plan is to start moving materials right after the new year begins for a full opening at the new location in early February. The Water Street store will stay open during the move.

William Boyd has spent 45 years working on Water Street, making him the longest serving employee. He and the others will move to the new spot, which Boyd said makes his commute much shorter.

“I just live a few minutes from the new building, so that will help,” Boyd explained. “We do have a nice view here, so I’ll miss that. I guess we are trading the water for the woods.”

Shooting in Washington leaves one injured

A man was hospitalized with non-life-threatening injuries after being shot in the wrist Tuesday afternoon. Stacy Drakeford, Director of Washington’s... read more