Mulberry scheduled to bloom in April 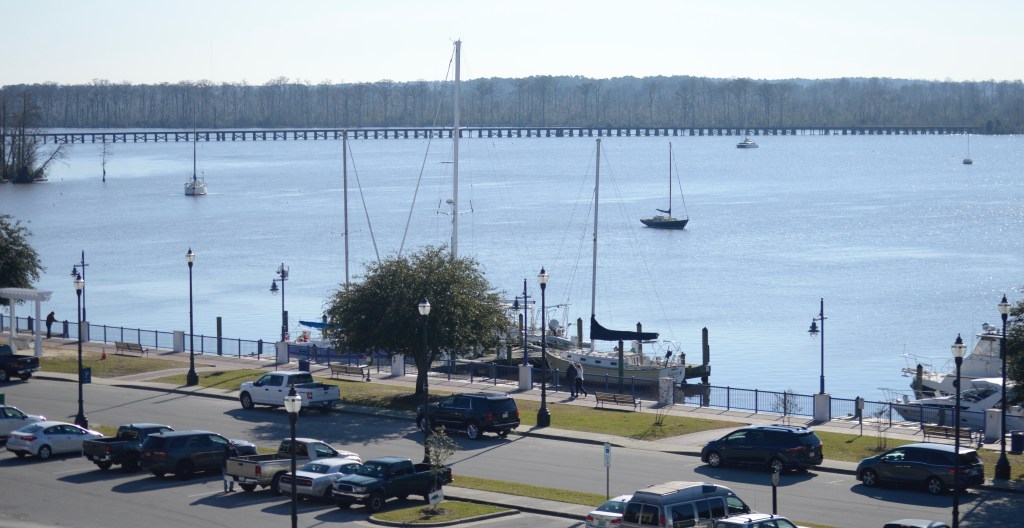 JAW-DROPPING: The view of the Pamlico River from the Mulberry House Brewery’s rooftop bar is spectacular. The building will also house a coffee shop, restaurant and boutique hotel.

Mulberries usually bloom in June. The people behind one of downtown Washington’s renovation projects hope theirs blossoms in April.

Local residents Mohamed and Dr. Reem Darar along with Durham couple Justin and Sunny Fejfar have big plans for the historic Fowle Building that has stood at the corner of W. Main and Respass since 1818.

The design calls for a coffee shop, restaurant and Washington’s first brewery on the first floor, a 16-room boutique hotel on the second and third, capped with a rooftop bar and patio with sweeping views of the Pamlico River to the east and west.

“We want this to be a community-oriented building that locals, tourists and boaters can use at all times of the day,” operations manager Daniel Beedle said. “We want this project to help continue to invigorate downtown and be a gathering place for breakfast in the coffee shop, lunch in the restaurant and for a relaxing evening watching a spectacular sunset from our rooftop bar.”

The ownership group, New Visions Partners LLC, bought the building six years ago and hired Beedle and his wife, Christine McGrath in 2018 to help them create a vision to best develop the historic structure.

“Washington is a fantastic place and we looked at what the downtown didn’t have and what we thought would fit well with all its assets,” the 32-year old who grew up in Arkansas, attended college in Oregon and worked in the food and beverage industry in New York, London and Miami explained.

“The riverfront/boardwalk area is wonderful; the area is known for barbeque and there’s a ton of boaters. We saw a need for a small hotel paired with a world-class brewery and thought a pared down fine dining restaurant and coffee shop with reasonable prices would work well. We thought the unbelievable view from the rooftop would kind of put the cap on the whole experience. Washington is the perfect place for this project, and we plan on it bringing more people and activity to the area.”

The project started out as the Castle Island Brewery, in honor of the landform plainly visible from the rooftop, but Beedle said somebody else beat them to it.

Crews started prepping and cleaning out the building two years ago, with breaks in between. Inside work on the 17,000 square foot structure started this fall and Beedle came on site earlier this month.

“We want to stay as true to the original building as possible and the Historic Commission was very helpful in that regard,” Beedle said. We shored up the foundation and the support walls, but it was actually in decent shape when we started. Most of the bricks on the first floor are original and we even kept a door in the side of a wall that doesn’t lead anywhere because it came with the place.”

Three months into the heavy construction with three months left until the target date of April 1st doesn’t faze Beedle.

“I think we’ll get there,” he said. “We want to bring a Mediterranean style menu combined with other food from around the world that is not overly expensive. We’ll have a world-class selection of wine and cocktails and the beer can’t get any fresher since it’s brewed right here. We want people walking by to feel like they can come in without going home to change clothes.”