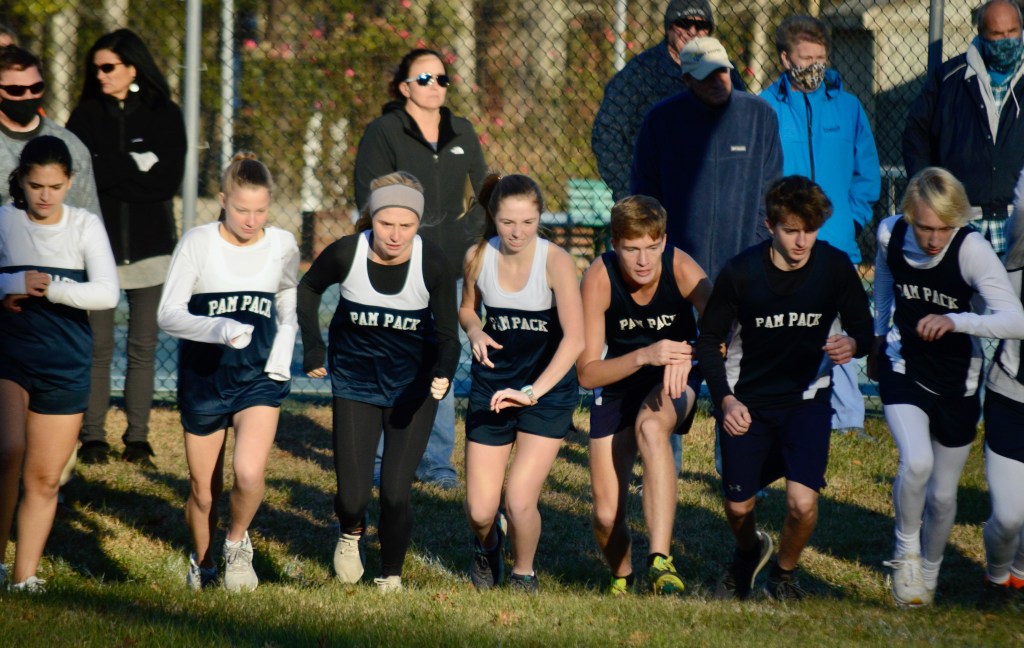 01: READY, SET, GO Seniors Mary Emma Holscher (3rd from left) and Ethan Sommers (third from right) set their watches before a recent meet. Both will try to win the individual titles at the conference meet Thursday at South Lenoir HS in Deep Run.

Thursday’ weather forecast calls for partly sunny skies, almost no chance of rain and a temperature in the low 50s in Deep Run, NC.

Those are perfect conditions for the Eastern 2A Conference cross country meet at South Lenoir High School as the Washington High School Pam Pack tries to bring home boys and girls conference titles.

The girls won all seven regular season meets, while the boys won five, lost to South Lenoir by one point at home, then tied the Blue Devils in their last meeting.

“Both teams have trained really hard and are ready to compete,” coach Dawn Landen said. “COVID-19 has thrown everything off for every sport and we’re no exception. We weren’t sure when the season would start, so we’ve been training since July. We are in great shape, but it’s also made for a really long season. We’re hoping we won’t have any setbacks in the next two weeks so we can finish strong.”

A WHS runner is the strong favorite to win in both divisions, something Linden said hasn’t happened in six years. Freshman Haley Broadwell has won all six meets in which she’s competed, while missing one with shin splints. Linden thought Broadwell would help add depth to an older, more experienced squad, but she exceeded expectations.

“I didn’t plan on her winning all her meets, but she’s worked hard and steadily improved,” Linden said. “She’s gotten consistently faster and has gone from a little over 23 minute pace (over a 5K) to around 21:50. I’m hoping she can go 21:30 before we are done.”

“I think all three of them will push each other,” Linden said. “I think being a conference champion appeals to Mary Emma and Aspen so they will try for their fastest time as well.”

On the boy’s side, senior Ethan Sommers has dominated the conference on his way to an undefeated season. Sommers, who transferred from Southside in search of better competition, recently set the WHS school record with a time of 16:27.

“He’s set his goals high and wants to run in college,” Linden said. “He knows he needs to get under 16 minutes to get noticed by the high level schools, so he’s trained hard with that in mind. He’s been a great addition to our team.”

The post-season continues with the regional meet at Croatan HS next weekend, followed by the state meet in Kernersville the following week. The top four teams from each region qualify for the state meet, while runners can also qualify individually.

Masks are mandatory now for all cross country practices and runners have to wear them to the starting line in meets. They can pull them down after 100 yards when separation starts to happen.

“We’ve been through a lot just like everyone else,” Linden said. “They’ve done fine with the masks and it would be fabulous to come out of this weekend with team and individual conference titles. Hopefully, the weather will hold out.”