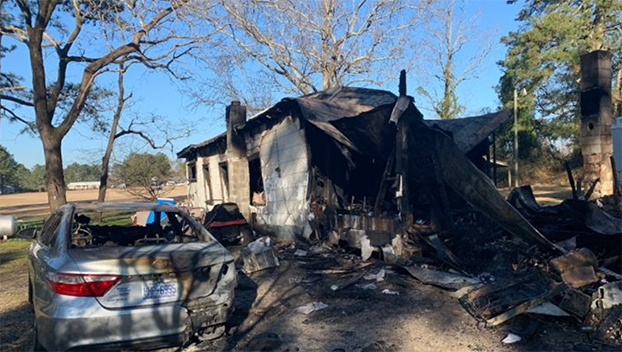 AFTERMATH: A photo taken after the fire was extinguished shows the remains of the Riddick family home. Riddick now lives in a trailer on the property.

The community has rallied around a Bath family after a fire in the early morning of Dec. 29 destroyed their historic home.

The 100 year old building has been in the Riddick family for four generations and was first owned by Dannessa Langley’s great grandparents.

The fire is still under investigation according to the Bath Volunteer Fire Department. In addition to losing her home and everything inside, Annie Riddick’s car was also destroyed by the flames. Miraculously, all three individuals inside when the fire started escaped and are being supported by their neighbors.

“The Bath community and surrounding areas’ support has been wonderful. Everyday somebody is stopping by and giving donations,” said Langley.

A GoFundMe page has been set up by Jenni Wallace-Uzzell and has raised over $6,000 in the several days since the fire took place. Venessa Langley, one of the daughters of Annie Riddick, is listed as the beneficiary and has kept the public updated on the situation.

“My family and I would like to thank everybody for the generous donations from people near and far, we can’t thank everybody enough,” Langley said via GoFundMe. “We just wanted to do a quick update on the funding we have received from you all, the funding is going towards clearing the property, housing, and transportation.”