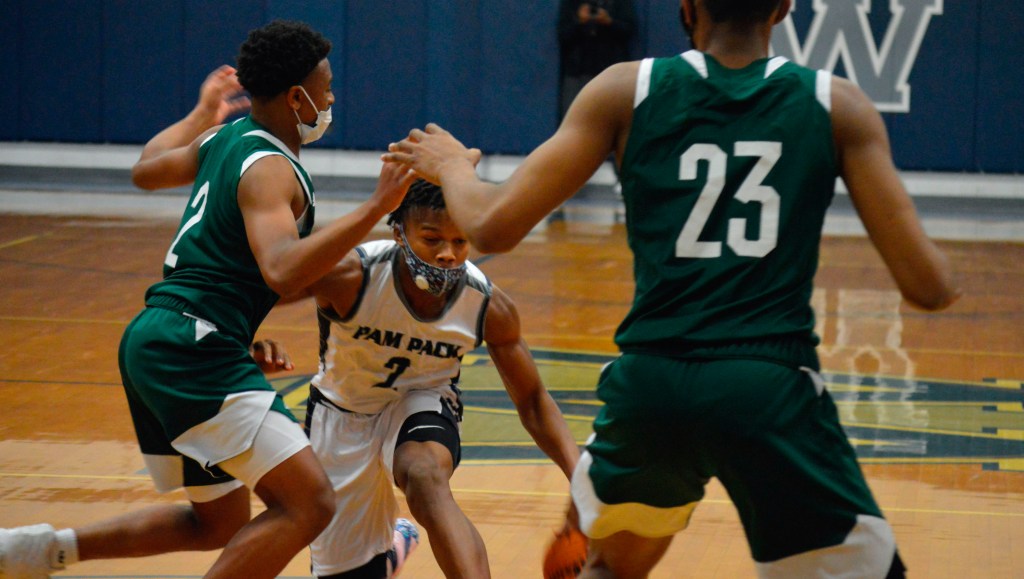 Junior Terry Jones tries to penetrate two Kinston defenders on the way to a game-high 20 points in a home victory.

The Pam Pack snapped a seven game conference losing streak to the Vikings that dates back three years. Veteran observers thought it was the first win over Kinston in recent program history.

The Vikings have dominated the Eastern Carolina 2A conference since joining three years ago with regular season and tournament titles every year.

“What an amazing night for our kids and this program,” second-year head coach David Allewalt said, while dripping wet from a post-game locker room water dousing. “We lost to them three times last year and were really motivated to win. Our guys were super excited to get started and to see them maintain that for the full 32 minutes was really gratifying.”

After Bryant’s slam, the Pam Pack reeled off 11 more points for a 13-2 lead that even a Viking timeout couldn’t slow.

Bryant threw down another jam to end the first quarter with a 24-8 lead and the Pack added on from there for a 41-16 halftime advantage.

Kinston played without senior Dontrez Styles, who sat dejectedly on the bench in street clothes after being injured in a game a week ago. Styles has already signed with the University of North Carolina and is regarded as one of the top players in the state.

“He is a great player, and we were looking forward to playing against him,” Allewalt said. “We know they were not at full strength, but our guys were physical right out of the gate and kept the game in hand all night. We control our own fate in the conference now and know we have to keep it going.”

WHS is 2-0 in league play in the abbreviated 14 game schedule, while Kinston dropped to 2-1 There is no conference tournament, so every game is important for state tournament seeding purposes.

“Those three wanted it the most and helped us build the big lead early,” Allewalt said. “The guys are calling themselves the Get Back Gang, because they want to get back all the games, they lost last year. Tonight was a huge steppingstone to greater things as we continue to change the culture of this program.”

“We jumped out quick and kept our energy up in the third quarter, which was key to putting the game away,” coach Ismial Harris said. “We played well against a good team.”

Things did not go as well for the Pam Pack girls as they fell to the Vikings, 58-22. Nine different players scored for WHS, led by senior Mary Emma Holscher with four points.

“We are very inexperienced and still learning,” coach Neal Carr said. “Our first two opponents, North Lenoir and Kinston, are very good, so we’ve had to improve against the top of the league. The girls didn’t quit, and I saw some good things.”