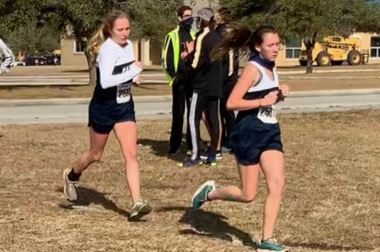 The Washington High School girls cross country team qualified for their first 2A state meet since 2013 with a third place finish in Saturday’s regional meet on a windy Croatan High School course in Newport.

The boys team finished fifth, but two runners will compete as individuals in the state meet Friday in Kernersville.

First Flight HS of Kill Devil Hills won the team competition in both races, with the host school second in both. The top three teams advanced to the state meet along with the top seven individuals whose team didn’t qualify.

Eighteen schools were represented with seven girls teams and 11 boys along with individuals from schools who didn’t qualify their entire team.

“Our strategy was to stay together as much as we could, so we could finish in the top three and go to state as a team and it worked,” Coach Dawn Landen said. “With that many schools competing, it was most important to score team points rather than have one runner do really well and the rest be far back. Our girls set a goal back in July of going to the state meet together and they did it. I’m really proud of the way they trained together as a group so they could all advance.”

Seniors Stella Frisbie and Heba Al Sudani also competed and will run this weekend. Each team is allowed seven runners while the top five finishes make up the team score.

Senior Ethan Sommers won his heat and finished sixth overall in the boys race. COVID-19 concerns forced the boys and girls races to be divided into two heats. Sommers’ time of 16:59 was fast enough to advance and junior Isaac Campbell also qualified as an individual.

“We were hoping that both teams would advance, but everybody ran their best race,” Landen said. “The wind made it difficult, but we handled it well. Ethan had by far the fastest time in his heat, so he’s looking forward to being pushed at the state meet. He’s worked very hard and has a chance to finish high.

The 2A state meet will be Friday at the Ivy Redmon Sports Complex in Kernersville near Greensboro. Once again, the boys and girls races will be split into two heats, with the first boys race at 2 p.m.

“We’ve been out here in some fashion since July, so it’s been a longer than normal season,” Landen said. “It’s given the kids something to do while not being physically present at school every day and given them a goal to work toward. The kids can see the finish line now and will be ready to finish strong.”