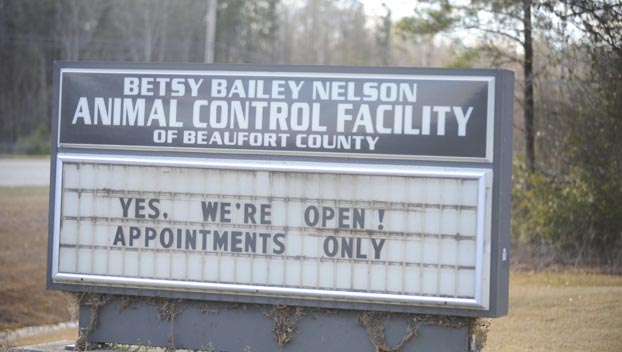 Beaufort County Animal Control in 2020 reported its lowest amount of euthanizations since at least 2011, along with an increased adoption rate.

The Betsy Bailey Nelson Animal Control Facility took in 1,666 animals in 2020. Of those animals, 1,166 were adopted, reclaimed or transferred to another facility. Animal control euthanized 471 animals, a decrease of 292 from 2019’s report. The shelter’s adoption rate in 2020 was 70%, an increase of nine percentage points from the previous two years.

“That’s a testament to Chief (Billy) Lassiter and the staff that he’s been able to manage in animal control, and the whole cooperative efforts that we’ve had with outreach partners and getting animals home, versus euthanization,” said Chris Newkirk, deputy director of Beaufort County Emergency Services. Newkirk’s department oversees animal control.

Animal control’s total intake in 2020 was the lowest it has been in at least a decade.

“If we look across the state, we do see that as a trend as a result of COVID, where intakes are down and adoptions are up, as people are home more and spending more time with their animals. ” Newkirk said.

Newkirk mentioned that animal control handles all types of animals, not just cats and dogs.

“We’ve actually had a ferret and a goat and a couple pigs,” Newkirk said. “We had a peacock,” he added with a laugh.