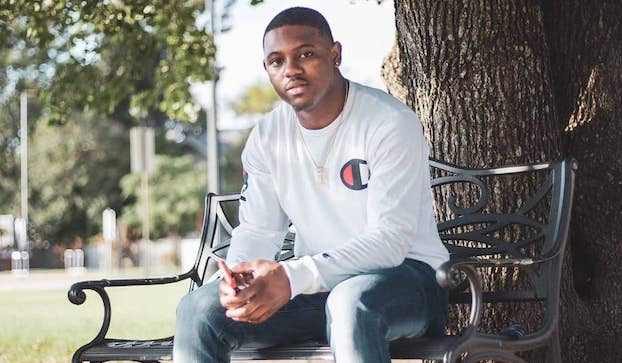 Washington High School senior Jayden Hambric will be back on the football field soon after helping his brother. (Contributed photo)

Washington High School senior Jaden Hambric is used to facing challenges on the football field, the basketball court and the track. Thursday will be a little different as he helps his older brother overcome one of his own.

Jordan Hambric will turn 19 next week in Duke University Hospital in Durham while he recovers from a bone marrow transplant designed to cure aplastic anemia, a condition that occurs when the body stops producing enough blood cells.

Jordan was well on his way into a successful career path when he was diagnosed one year ago. He graduated a year early from the Northeast Regional School of Biotechnology and Agriscience in Jamesville and while he was there, earned enough credits from Martin Community College to leave with his associate degree. He was thriving in the East Carolina University mechanical engineering program when life took an unexpected turn.

“I had been having migrain headaches every day for two months,” Jordan said. “The doctors couldn’t figure it out until the blood work came back. It’s been tough since then. I get tired easily and had to suspend my schoolwork because I didn’t have the energy to keep up.”

The Hambrics went to UNC Hospital in Chapel Hill, but they couldn’t find a match for a traditional transplant. Duke handles stem cell procedures and Jayden tested as a perfect match.

There is a lot on the line for the senior three-sport athlete who is preparing for his final season amid COVID-19 uncertainty. The 6’0 205 lb. running back-linebacker was one of three 1,000 yard rushers for the Pam Pack last season and is looking to build on his All-Area selection by this newspaper to follow his dream of playing college football. Several are interested, but all that can wait. Family comes first.

“It was a no-brainer. I didn’t hesitate for a second after they told me I was a match,” Jaden said. “He’s my brother and family is always more important than sports. I won’t miss that much time during football (which starts its COVID-delayed season in three weeks). I’ve known since October that it was coming, so I’ve had time to prepare. My coaches and teammates have been very supportive about it, so there’s no question in my mind that it’s the right thing to do.”

Jaden faces a 10 day recovery period after the two hour donation procedure, while it will be a longer road for Jordan.

He has been in Duke Hospital for almost three weeks and is facing another month or so of recuperation.

If he doesn’t have any adverse reactions to the transplant, he will spend two more months with his father Chad, who lives in Cary, so the doctors can monitor his progress through return trips to the hospital multiple times a week.

“We hope to have Jordan back home in Washington sometime in May,” said his mother, Sunyoung Razor. “Of course, I’m concerned about both my boys, but I trust the doctors. His dad and I are very proud of the way Jaden didn’t think twice about helping his brother.  I’m optimistic things will turn out just fine.”

We asked area athletes five questions so you can get to know them a little better. Today’s guest is Washington... read more