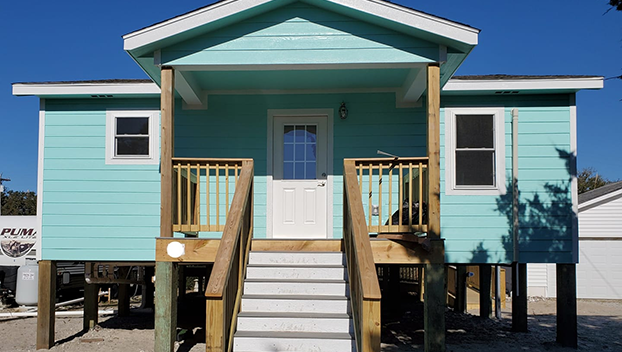 COMPLETED HOME: The home was completed on Jan. 22, 2021 and construction took just under three months to finish. This build is one of many scheduled, with two homes expected to be completed in the next two weeks. (Photo submitted by the Ocracoke Interfaith Relief and Recovery Team)

The Ocracoke Interfaith Relief and Recovery Team (OIRRT), in partnership with Hyde County and Christian Aid Ministries (CAM), recently completed construction on the first of many homes as part of the Reconstruction Project benefitting Ocracoke residents displaced by Hurricane Dorian.

The project began in October 2020 with $850,000 in funds from the North Carolina Office of State Budget and Management allocated to the reconstruction of homes that were destroyed or damaged by Hurricane Dorian.

“Originally, there was $850,000 in the grant that came through the State into the county, which through our partnership we are managing. Out of that $850,000, we have currently committed $705,000 of that and probably by our upcoming meeting this month, the remainder of that will be committed,” said Belch. “What we have expended has only been around $375,000 and obviously we can’t work every project at once but we have committed to those projects.”

OIRRT was founded in October 2019 after Hurricane Dorian struck the eastern coast of North Carolina in September. 400 of the 1,200 structures on the island were damaged by the storm and 200 were deemed completely inhabitable. This left around 40 percent of the residents of Ocracoke displaced with no place to stay.

“I’m very grateful, as well as our group, that we’ve had such a great partnership with the county over the past months. It’s been great,” said Belch.

To support these residents immediately following the storm, Hyde County provided 30 travel trailers as temporary living accommodations. Of these original 30, only six trailers are still on Ocracoke and Ivey hopes that a few more will be removed soon.

“We have finished some smaller projects but one of the first new builds was just finished this past week. We had the opportunity to move one of the residents back into a home after 16 months,” said Belch. “We’ve been very grateful for that and the relationship with Christian Aid Ministries as they have been here on Ocracoke partnering with us for the build and construction portion of this project.”

The recently completed build is a one bedroom, one bath home. The home was constructed on stilts and is one story. Prior to construction completing, one of the 30 travel trailers was serving as temporary accommodation for the resident.

“We have five projects right now that are going on simultaneously. We have one project that has been completed, we have two other projects that we look for, one was a complete build and one was a total rebuild,” said Belch. “We look forward to having both of those projects finished within the next week and a half to two weeks.”

The reconstruction project is expected to continue through January 2023. Of the original estimate for 400 to 500 residents displaced, only 80 to 90 are still experiencing displacement due to Hurricane Dorian. OIRRT is focusing on supporting the individuals with the most dire needs. Visit https://oirrt.org/ for more information about the reconstruction project and other resources from OIRRT.

“We’re looking forward to moving ahead over the next couple of months. I’ve been very thankful again of all the groups and all the partnerships,” said Belch.