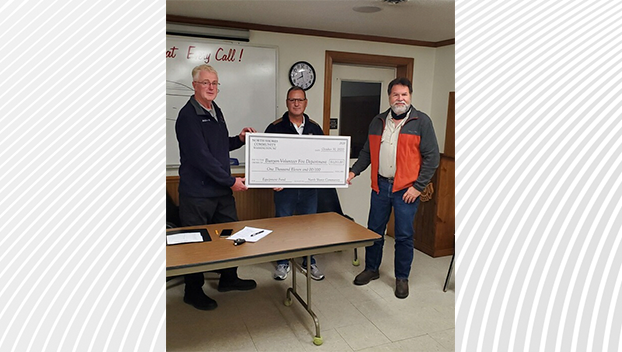 Bunyan Volunteer Fire Department received over $1,000 in donations collected from the North Shores community in Washington as part of a program organized by the community watch.

“We typically have an annual picnic where we have emergency services, first responders, and the sheriff’s office as our guests and we talk about Community Watch safety but this year we didn’t have that because of Covid,” said Hammonds. “Instead, we came up with a way to remember 2020 not as a negative remembrance.”

The fundraiser was scheduled by community watch members and took place during the month of October, which is also known as Fire Prevention Month. In total, the North Shores community raised $1,011 and presented these funds to the volunteer firefighters at their December meeting.

“We collected money for the volunteer fire department in the Long Acre district, the Bunyan Fire Department,” said Hammonds. “I coordinated with them and they happily received the donations for the community.”

Bunyan Fire Department is one of 14 departments within Beaufort County. It is a part of the Beaufort County Fire Association and is a volunteer station that relies on support from residents to continue serving the community.

“I was hoping to shake the tree limbs of the other communities and let them consider their volunteer fire department, since they didn’t get to do a fundraiser. I think this was just a way to get that out because they do need some help,” said Hammonds.

Take a walk through Washington’s Historic District and you might come across the Frank A. Moss House located at 129... read more