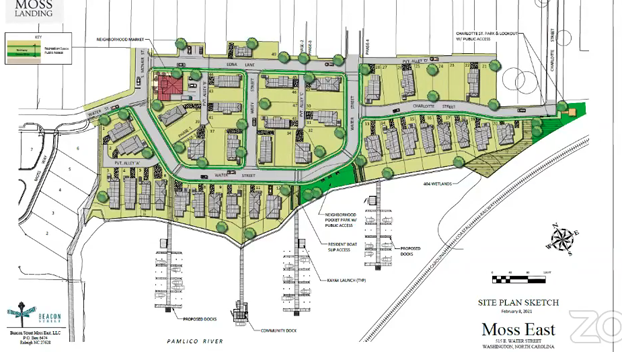 A site sketch for the proposed Moss East development

Renn’s motion included three conditions: All roads and sidewalks in the proposed neighborhood, which is essentially the second phase of Moss Landing, must be conveyed to the city after construction is completed, allowing for public access; a memorandum of understanding detailing the level of access to two proposed recreational areas inside the neighborhood must be signed by the city and the developer; and public access must be guaranteed for any riverside boardwalk the developer decides to build on the southern border of Moss East. The developer has no obligation to build a boardwalk.

Finnerty and Kane have been advocating for the city to extend the existing Washington boardwalk in the direction of Havens Gardens. Currently, the boardwalk starts in downtown Washington and reaches as far as the Moss Landing development. The councilwomen shared their common viewpoints in a co-authored column that appeared in the Feb. 6 edition of the Washington Daily News.

Beacon Street Development has been cooperative with efforts to improve public accessibility to the proposed neighborhood, which will occupy a 6.75-acre tract between Charlotte and Mac Nair Streets. But Beacon Street President Jim Wiley doesn’t support the idea of extending the existing boardwalk to include Moss East’s waterfront, stating that the boardwalk would have a significant negative impact on the planning of the neighborhood as well as the values of some of the 49-single homes planned for the new development.

Kane said the third condition included in Renn’s motion, which calls for public access to any boardwalk the developer builds, leaves the city “hanging on an indeterminate future.”

“I could support that proposal in its physical manifestation, absolutely,” Kane said. “But in trying to carry out my obligation to the public, I don’t want to have that access hinge on such uncertainty.”

Renn responded by saying that any desires or intentions to extend the existing boardwalk to include the new development should have been established before the Moss East project started.

“Unfortunately, these would have been good exercises to have had two years ago while this property was just sitting there,” Renn said. “… And I think to a certain degree, the fact that we didn’t — it’s not appropriate to take the risk of putting everything on hold while we figure that out.”

Before Renn’s motion, a similar proposal introduced by Finnerty failed by way of a 2-3 vote, with Finnerty and Kane voting for the motion. Finnerty’s motion also had three conditions, and the first two were identical to those included in Renn’s proposal. Finnerty’s third condition was to allow the purchase of an option to buy a strip of land on the property’s southern border in order to allow for a “feasibility evaluation to take place on the installation of an extension of the existing boardwalk.”

The cost to purchase that option would be $100, City Manager Jonathan Russell confirmed. The city would have four years to decide whether to exercise that option — a move that would be much more costly.

“The cost to exercise that option would either be agreed upon by the two parties — the developer and ourselves — which, Mr. Wiley has mentioned, the number he has in mind is around $2 million,” Russell said. “Or it would be established by an MAI appraiser.”

“So much for a progressive Council,” she said.