Firefighters and volunteers team up for Old Ford VFD fundraiser 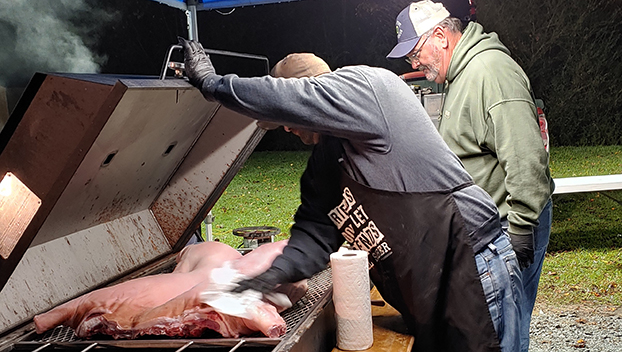 Pitmaster and two-time consecutive competition winner DJ Stox is hoping to take home another victor’s prize on February 20th, at a benefit cook-off for the Old Ford Fire Department, sanctioned and judged by the Carolina BBQ League. (Karen Theil)

The fires of dedication and the bonds of brotherhood have combined to win another battle over pandemic-related restrictions and event cancellations in Beaufort County – this time the wildly popular 27th annual Survivors’ Rodeo sponsored by the Old Ford Volunteer Fire Department.

Fire department board members made that decision in late 2020, because of government limitations on crowd size, and the fact that the rodeo’s traditional location—the Bob Martin Agriculture Center in Williamston—is one of many government-run buildings closed during the pandemic. “We got the official word in November or December and immediately started looking for another way to raise money,” said Old Ford Fire Chief Josh “Red” Boyd.

This match made in firefighters’ heaven is the result of a friendship between Old Ford firefighter Jeffery Everett and Evan “Tiny” Woolard, a member of Bath Volunteer Fire Department and well known organizer of area BBQ competitions —including the annual one at Chocowinity Volunteer Fire Department. “We used to do BBQ chicken sales back in the day and knew how well Chocowinity has done with their BBQ events, so we brainstormed and decided we should try it,” Boyd said.

All three men echoed the same sentiment when asked about the decision to team up. “I consider every firefighter in the world to be a brother or a sister. I don’t care what department they’re from,” Boyd said, shortly before Everett added that “this is a big family and the Lord is our wing man. At the end of the day, whoever needs us and whichever department asks, we’re there for them. That’s what it’s all about.”

The event is also a major change for the Carolina BBQ League, which is sanctioning the cook-off. All 20 grill teams will be cooking with “natural sources only”, said Brownie Futrell, who is head judge for the Old Ford competition. He said this will be the first of eight sanctioned BBQ events that won’t include gas or electric BBQ grills. Competitors at next Saturday’s event will include DJ Stox, who was the league’s natural source state champion in 2020, as well as Beaufort County residents Tyler Simmons, Thomas Spruill, and Mark Woolard, who is Evan Woolard’s father. “It’s definitely a family thing. When he can’t cook, I cook,” said the younger Woolard.  A team has also been organized specifically to honor and pay respects to the family of area BBQ legend Timmy Evans, who died last December and whose love for BBQ was matched only by his dedication to family, wildlife groups, and baking for his friends.

BBQ plates go on sale at 11am on Saturday, February 20 at the Old Ford Volunteer Fire Department, 6050 U.S. Highway 17 in Washington.  Boyd said the event is scheduled to end at 3pm “or whenever we run out of meals.” Plates cost $8 each and include BBQ, slaw, Brunswick stew, and dinner rolls. Boyd said anyone wanting to donate more may give cash to the volunteer who greets them at the drive-up event. Please wear masks once vehicle windows are opened.

“I’m not good with words, so I’ll just say that we greatly appreciate the support of the community and Beaufort County,” Boyd said. “We look forward to seeing everybody at the firehouse on Saturday—and at the rodeo next year.”