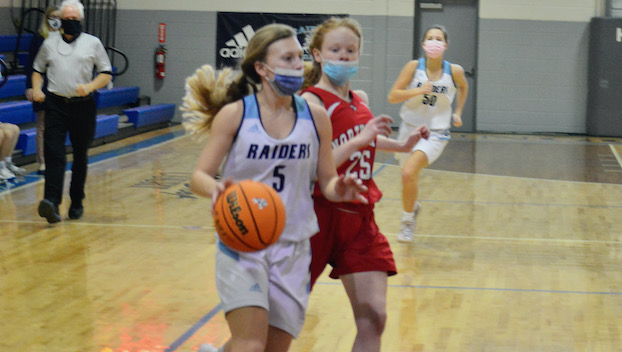 Senior Riley Cutler drives to the basket for two of her team-high 16 points as Pungo Christian Academy advanced to the East Regional final.

The Pungo Christian Academy girls basketball team punched their ticket to the 1A Final Four with a hard fought 60-52 victory over Northeast Academy of Lasker Saturday afternoon on Hank Stoop court.

The top-seeded Lady Raiders (14-1) have homecourt advantage for at least one more game after they knocked off their conference rival for the fourth time this season, while all but one of the Eagles (7-5) losses have been to PCA.

Northeast held the early lead before the Lady Raiders rallied for a 20-13 lead early in the second quarter. About that time, senior standout Lauren Kellie Ricks was whistled for her third foul and went to the bench. Pungo managed a 24-21 halftime lead but trailed by a point late in the third quarter before back to back steals and baskets from seniors Riley Cutler and Emma Williams gave them a 35-34 into the final quarter.

Ricks returned at that point and consecutive steals from Williams and sophomore Abbey Cutler led to layups and put PCA in the driver’s seat 46-41 with four minutes left.

“Our defense won it for us again,” said coach Melanie Eddleman, whose team gave up under 30 points a game on average during the regular season. “We knew Northeast was a good team and we needed a close game like this. We kept our poise while Lauren Kellie was out, and she gave us a life when she returned. Riley and Abbey put good pressure on the ball and scored some big points for us. We’re glad we get to keep playing.”

The Cutler sisters combined for just under 13 points a game during the regular season, but Riley had 16 and Abbey 14 on Saturday. Ricks added 10 points and five steals, while sophomore Reagan Stoop scored 10 and grabbed a team-best 13 rebounds.

The Lady Raiders host Lee Christian of Sanford (13-5) Tuesday night for the right to advance to the state title game on Saturday.

Victory Christian Center of Winston-Salem, the top seed in the West will face the Wilson Greenfield-Halifax Academy winner in the other semi-final .

Victory Christian is ranked number one in the 1A state MaxPreps poll, while PCA is second.