NWS on severe weather Thursday night: ‘Do not let your guard down’ 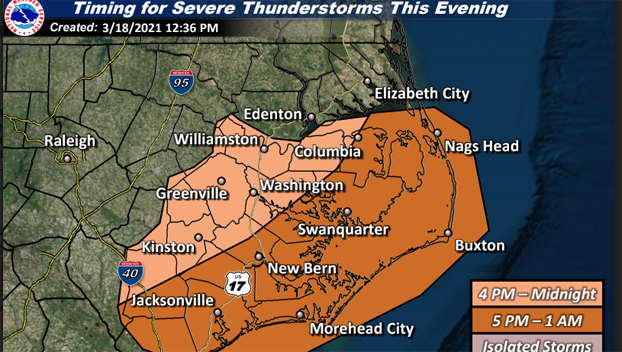 The threat level for severe weather in Beaufort County on Thursday evening is now a 3 out of 5, or “enhanced,” according to the most recent briefing from the National Weather Service’s forecast office in Morehead City.

“As mentioned earlier today while the threat is not as widespread as previously thought, numerous severe storms are still possible,” an email from the NWS reads. “Please do not let your guard down.  Have multiple ways to receive warnings and know where to seek shelter.”

The briefing shows that there is an “elevated” threat of damaging thunderstorms, wind gusts and tornadoes throughout all of eastern North Carolina on Thursday night.

“Strong, damaging winds in thunderstorms could lead to structural damage, trees down/uprooted, and power outages,” the briefing reads in part. “Tornadoes, with a few potentially strong, are possible, resulting in areas of enhanced to significant damage.”

There is also a moderate risk of coastal flooding, and dangerous sea conditions are likely to develop.

Wind gusts could reach as high as 50 mph along the Outer Banks. Wind gusts in Beaufort County might hover around 30 mph.