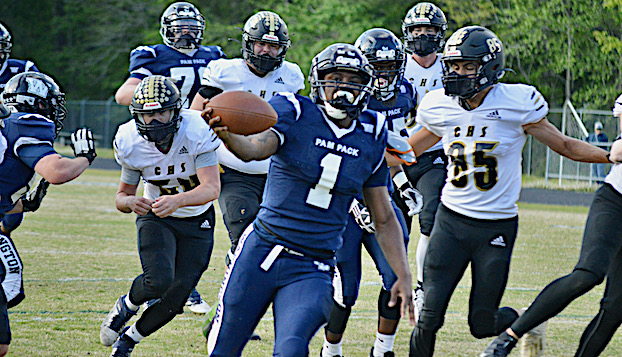 Senior Jaden Hambric crosses the goal line in the first half of Washington’s 29-14 home victory over Croatan Friday night.

WHS (7-1) advances to the Eastern final of the 2AA state playoffs and will host St. Paul’s of Robeson County next Friday for the right to play for the state title.

The Cougars (7-2) came into the game averaging 44 points a game and over 350 yards of total offense. They took a 7-0 lead on their second possession, but the Pam Pack answered with Jaden Hambric’s 15-yard run to tie the score, then took the lead for good when Terry Moore ran 26 yards to set up Kris Hill’s one yard plunge early in the second quarter.

Meanwhile the defense was holding Croatan off the scoreboard by forcing four punts and stopping the Cougars on fourth down once.

“Our defense made the difference in the first half,” coach Perry Owens said. “We are finally healthy along the front and Robert Pollock, Kris Hill, Wheeler Johnson Tysheed Dixon came up with some big stops tonight.”

Washington upped the advantage to 29-7 as quarterback Hayes Pippin capped a 54-yard drive with a one-yard plunge, then caught the two point conversion from kicker Ridge Zerniak on a trick play with 1:32 left in the third quarter.

Croatan mounted a last ditch effort to score once, but Dixon and Xzaivious Moore came up with back-to-back fourth down tckles for loss to prevent the Cougars from making a late run.

The Pam Pack overcame three fumbles and an interception to keep their season alive.

“We do have things to clean up for sure, but I’m proud of our effort and intensity,” Owens said. “Croatan is very well-coached and they had a great game plan. It came down to personnel tonight and our guys made plays when we needed it.”