Council appoints new member to board 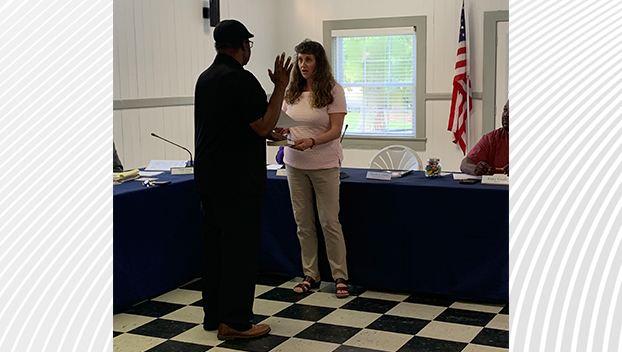 SWEARING IN: Greg Satterthwiate was sworn in by town clerk Rosemary Johnson at the Board of Aldermen meeting Monday night. (Photo submitted by Lynn Davis)

BELHAVEN – The Board of Aldermen appointed a new member to fill the vacant West End Alderman position during the monthly town council meeting Monday.

The board has appointed Greg Satterthwiate as the new West End Alderman. Satterthwiate is a former member of the town council and most recently served as the chairman of the board of adjusters, a position that is now vacant following his appointment to the council.

In addition to these credentials, Satterthwiate is also involved in the celebrations committee, the Belhaven Memorial Museum committee and the community watch committee.

This appointment comes following the resignation of former West End Alderman Bradford Linton at the Board of Aldermen meeting for the month of March.

Satterthwiate will serve on the council for the remainder of Linton’s original term, which ends in November of this year. At that time, Satterthwiate may run for reelection or another resident of Belhaven may be elected to serve as one of the two West End Alderman for the following term.