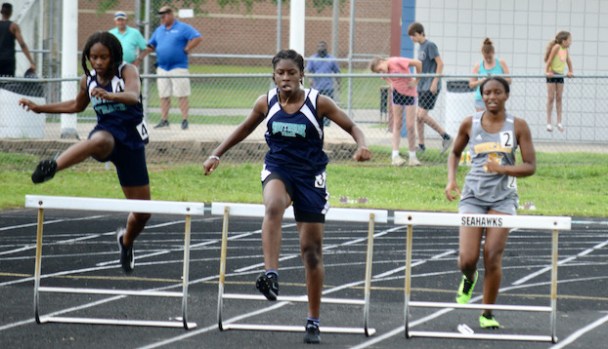 Sophomore Ka’Nyah O’Neal (middle) will compete in the 300 meter Hurdles Friday at the state 1A track and field meet at North Carolina A&T in Greensboro. (Steve Barnes/Washington Daily News) 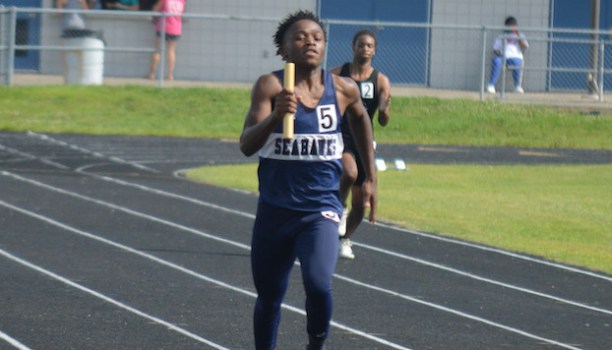 Freshman Tequan Moore will be part of the 4 x 100 and the 4 x 200 meter relay teams at the state 1A track meet Friday at North Carolina A&T in Greensboro. (Steve Barnes/Washington Daily News) 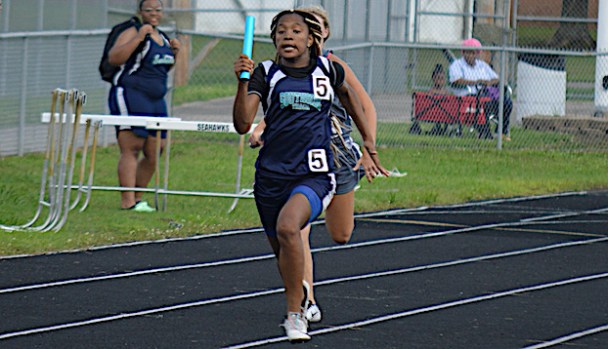 Senior Tajhe’ Speller will compete in the 4 x 100 relay Friday at the 1A state track meet in Greensboro. (Steve Barnes/Washington Daily News)

Five girls and seven boys will represent Southside High School at Friday’s 1A state track and field meet at Truist Stadium on the campus of North Carolina A&T in Greensboro.

Sophomore Ka’Nyah O’Neal finished third in the 300 Hurdles at Saturday’s regional meet to qualify for the state meet in her first year on the team.

“She’s a great athlete and competing in track will help her on the basketball court next season,” coach Andre Quinerly said. “She came back late from a travel basketball tournament the night before regionals, but still wanted to compete. She probably would have qualified in the high jump as well, but I’m proud of her for getting there in the hurdles.”

Seniors Chelsea Hemby, Laquisha Woolard, Tajhe’ Speller and Tyanna Tyre finished fourth in the 4 x 100 relay and will compete in that event Friday.

“It’s the last race for all four of them,” Quinerly said. “I hope they compete well and end their careers on a good note.”

On the boys side, senior Nic Crawford will compete in the 110 and 300 Hurdles after taking third in both events at the regional.

“He probably hasn’t said two words in two years, but he works very hard,” Quinerly said. “He has been our biggest surprise and that hard work has turned him into one of the best hurdlers in the state.

Classmate Jaquan Cobb will race in the 100 meter event and as part of the 4 x 100 meter relay team with Tequan Moore, Hunter Leary and Kenjray Coffield.

“This is Jaquan’s first time at state in an individual event and that’s great for him,” Quinerly said. “He’s very likeable and coachable, so we want him to do well.”

Junior Victor Gonzalez will be in the 400 meter race and is part of the 4 x 200 relay team along with Moore, Leary and Darren Joyner, who also qualified in the high jump.

“He set his goal to make it to state in the 400 and he did it,” said Quinerly. “He’s prepared himself well for this opportunity.”

Brandon Clark rounds out the Seahawks lineup in the triple jump.

“Our boys finished fourth in probably the toughest regional in 1A, so the competition at state will be familiar. It would be the icing on the cake to end a crazy year with a fantastic finish. We’ll see how it works out.”