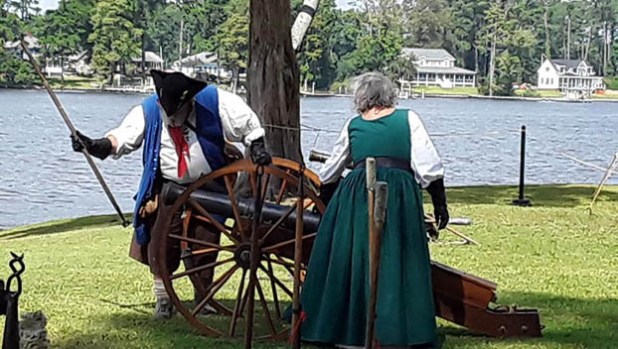 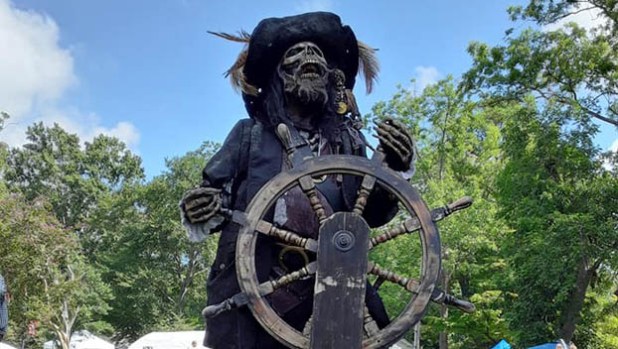 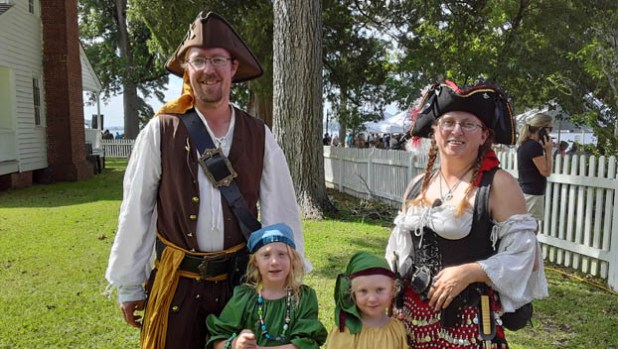 Husband and wife Ryan and Kali Sanders and their daughters Zoey (L) and Emma (R) were in town after coming all the way from Arizona to visit family in the area. (Philip Sayblack)

BATH – The streets of Bath were full of pirates over the weekend.

Rain that came through eastern North Carolina Friday caused concern among some about whether Bath Fest would go on, but the gray, gloomy clouds that filled the sky early Saturday morning gradually parted, letting the sunshine and Carolina blue skies through. So many people attended this year that vehicles lined the town’s streets and filled additional parking areas.

“The weather was somewhat worrisome,” said historic interpreter A.J. Drake. “It looked like the rain was going to last through the weekend, but thankfully things cleared up.”

The sound of music filled the air, courtesy of the Pitt Community College Symphony Orchestra and Bath Elementary School choral groups as people made their way through the town, enjoying the festival’s sights, smells, and sounds. Meanwhile, the loud bangs of cannon fire brought cheers as members of Blackbeard’s Crew, Inc. demonstrated how the weapons were used.

“This is a wonderful and charming town,” said Randy Gnatowsky, living history interpreter and Blackbeard’s Crew, Inc. member. “The people here are so good to us. If this had been a two-day event, that would have been even better because we have even more we could show people.”

Blackbeard’s Crew came down to Bath from Virginia, but others came from even farther away, showing clearly, the festival’s popularity. Husband and wife Ryan and Kali Sanders and their children Zoey and Emma had come to the area from Arizona to visit family and decided to attend Bath Fest because of its love of pirates.

Marilyn Ingram, Rick Jones, and Nancy Smith, who work with the Winston-Salem-based vendor, North Trade Street Arts, said making the trip from the Triad to the historic Inner Banks town was “no big deal” for them.

“The last time we came here was in 2018, but the past year or two, it’s been cancelled because of the pandemic,” said Ingram. “Since we’ve done this so many times in the past, it’s really not that big of a haul for us. We had a fun time in those past years and we’re having a good time being back with everyone this year, too.”

Fellow pirate enthusiasts Melissa Peck and Michael Pridgen made a shorter trip to attend this year’s festival. The couple, also dressed in full pirate apparel, made the drive from Sharpsburg to attend.

Phoebe Wahab, one of the festival’s organizers, said she was also happy to see the event came to fruition, stating, “I think the people of Bath deserve a family friendly outing. What’s more, people love pirates. It is also a boost to the community’s morale.”

This year marks the 15th anniversary of Bath Fest. With this year’s festival completed, plans are underway for the festival’s 2022 edition.