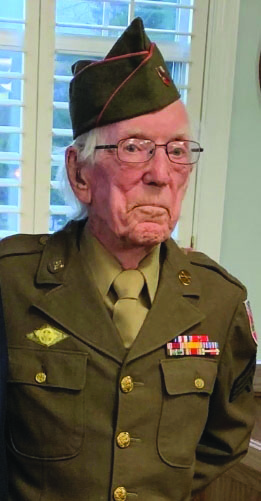 Oct. 27, 1918 – Sept. 18, 2021
Hubert Garland Edwards, 102 of Sanford passed away Saturday September 18, 2021. Funeral services will be held at 11am on Thursday September 23, 2021, at First Baptist Church in Sanford. A private committal service will follow.
Hubert was born in Beaufort Co. to the late Fenner Augustus Edwards and Sadie Godly Edwards. Hubert enlisted in the Army in 1939. He fought in over eight major campaigns including WWII where he spent 660 consecutive days on the frontline fighting. He was assigned to the 17th Field Artillery Battalion where he was a sharpshooter and Howitzer gunner. He discharged from the Army in 1945 at the rank of Sergeant with several metals and ribbons. He was awarded the Army Good Conduct Medal, America Defense Service Medal, American Campaign Medal, European-African-Middle Eastern Campaign Medal with Arrowhead, WWII Victory Medal, Army of Occupation Medal with Germany Clasp, one Silver Star, two Bronze Stars, and many Sharp-shooter Pistol medals. He was a Mason for 74 years, lifetime member of the VFW, member of the Moose Lodge, and member of Beaufort Golden “K” Club where he served 2 years as president. He was also an active member of the Western Harnett Lions Club and a participant in the Drama and Dance Club at the Enrichment Center. He also taught BARACCA Sunday School Class at First Baptist in Washington NC. He loved to bake and cook.
He is survived by his wife Lynda Ruth Lovett Harding Edwards; daughter Gail Edwards Surles; brother Roy Edwards (Treasure); grandson Patrick Surles (Vesta); triplet great granddaughters Emma Surles, Kayla Surles, and Kennan Surles; and many nieces and nephews.
He is preceded in death by his parents; grandson Michael Surles; and brothers and sisters.
A visitation will be held in First Baptist church Fellowship Hall Wednesday from 6-8pm.
Memorials can be made to First Baptist Church, 202 Summit Drive Sanford, NC 27330 or to Ronald McDonald House, 529 Moye Boulevard Greenville, NC 27834.
Online Condolences may be made at www.rogerspickard.com
Arrangements are by Rogers-Pickard Funeral Home.