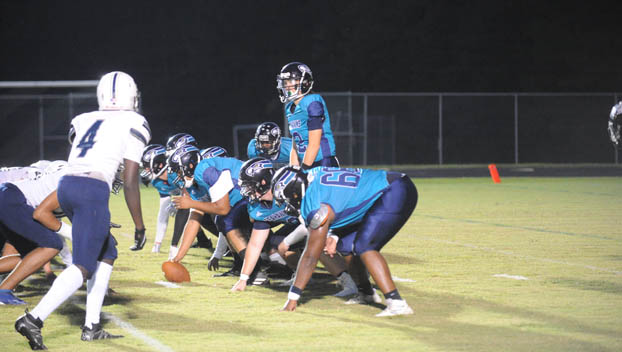 Senior Kenjray Coffield notched two touchdowns on offense and an interception on defense, and junior Manvonte Deloach grabbed three interceptions as the Southside football team cruised to a 44-7 win over Swansboro on Friday night.

The Seahawks (4-0) hadn’t played since Sept. 3 due to COVID-19 protocols, but they didn’t need much time finding their groove on both sides of the ball against the Pirates (1-3).

“To be able to come out and execute from the get-go, and our defense had another heck of a ballgame with multiple turnovers, and our offense being able to execute the way it should, I’m just very proud of all of them,” Southside coach Jeff Carrow said.

“I don’t feel like we’ve played four quarters of ball all year till tonight,” he added.

Coffield played a key role in Southside’s hot start. He scored on a 6-yard run on the game’s opening drive, and followed that up with a 56-yard touchdown run after Deloach grabbed his first interception.

Following another Deloach interception in the second quarter, sophomore Tequan Moore scored on a 19-yard run to put Southside up 22-0 with a successful 2-point run by Keywon Campbell.

On the ensuing Swansboro, Coffield intercepted an overthrown ball in the endzone. That helped set up a 15-yard touchdown pass from Walker Hill to Shawn Gerard that put the Seahawks up 28-0 after a failed 2-point attempt.

Swansboro lost a fumble on its first drive after halftime, and touchdown runs by Jamie Corprew and Alex Moore helped the Seahawks put the game further out of reach and ultimately force a running clock in the third quarter.

Swansboro got on the scoreboard when Isaiah Bromelle returned a kickoff for a touchdown late in the third.

Check back this weekend for more coverage of Southside’s win.