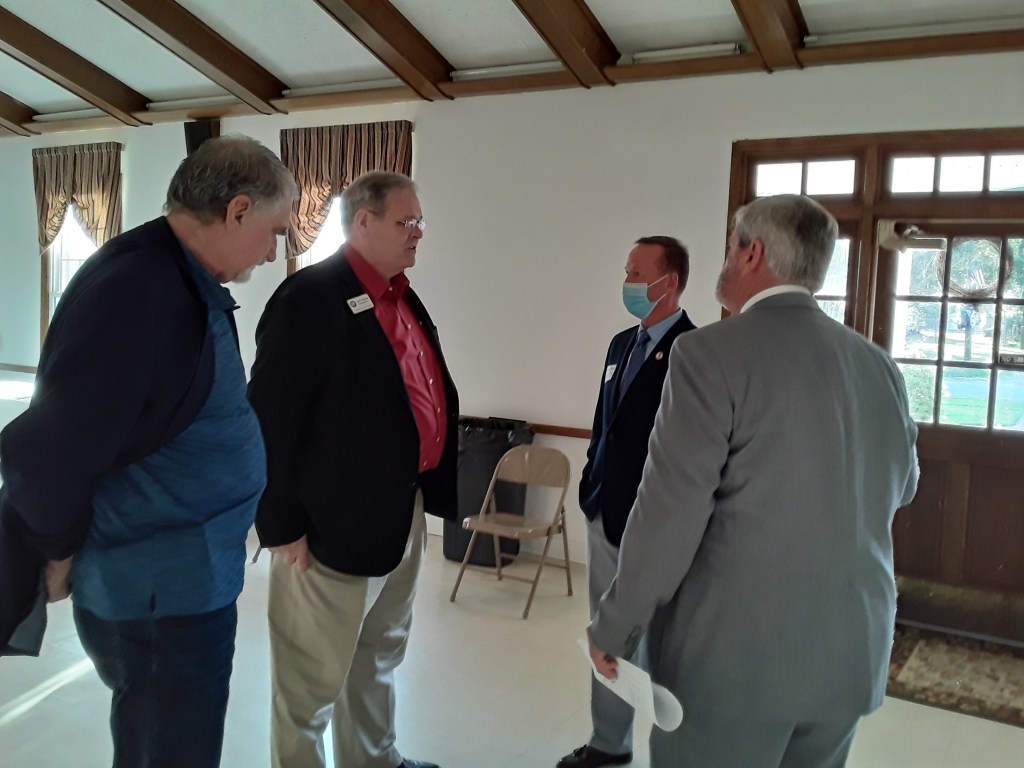 AURORA — “It’s gonna be the rebirth of Aurora!”

That were the words of Aurora town resident Collin Harrell on Thursday night at a meeting announcing the development of a new industrial park in the town limits. Aurora Mayor Clif Williams made the announcement at the meeting, which was also the kickoff of a recruitment effort for a new town group called the Aurora Leadership Council .

“This is the fruition of seven years of groundwork,” Williams told the audience of more than 80 people. “The new day is dawning for all of us.”

So many people attended Thursday night’s meeting at the Aurora Community Center, that organizers almost ran out of chairs to seat everyone. Williams told the audience, which consisted of people of all ages and who represented various businesses, civic and religious organizations, and educational agencies, that work on the 26-acre site will start soon.

Williams added that the site will feature a satellite campus for Beaufort Community College, a new building for Nutrien — which next to PCS Phosphate is one of the town’s primary employers — and buildings for other businesses. He stressed contracts for those other, unidentified businesses, are in negotiation.

Thursday night’s meeting was livestreamed through the town’s Facebook page. ALC member Kurt Ryan told the audience that the livestream was part of an effort to meet CDC recommendations about the COVID-19 pandemic. He added the livestream also marked the first time in three years that the town’s Facebook page had been active, tying that announcement in to a discussion on the need for broadband internet in the town.

Ryan, during his remarks, outlined a strategic plan that the ALC – an all-volunteer group – will use to build support for the industrial park and town. The plan aims to build that support through focus on items such as economic and educational development in Aurora, and the role of local and regional governance in the project and town.

Additionally, the plan presents steps that the ALC must take in order to make the plan successful, as well as a timeline for the strategy. The information states the plan’s “endstate” is 2035. More information on the plan and how to become a member of the ALC is available online at https://www.auroralife.us/alc.

Aurora resident Allen Paul explained that tying Thursday’s recruitment kickoff for the ALC with the industrial park development announcement was intentional. He said the ALC will work directly with town officials and residents, as well as residents of the Richland Township to increase support for the industrial park and interest in the town and its future.

Paul added that including the residents of the Richland Township was important because of the support that they have shown for Aurora over the years. According to Paul, the town has already received a $450,000 “soft loan” from Beaufort County to help fund construction of the industrial park. A “soft loan,” he explained, is one that allows an organization or individual to repay money as circumstances allow.

Williams expanded on Paul’s statement, noting that the town has also received approximately $1.2 million in grant funding from the NC Department of Commerce and the Golden Leaf Foundation for the project.

In talking about the importance of the industrial park on the town’s future, Williams said “The industrial park would create a need for jobs and in turn a need for housing for new employees. We have estimated that having this industrial park, with the facilities and employees, will increase our town’s revenue by between $40,000 and $50,000 annually. With a town budget of nearly half a million dollars, that is very important.”

Harrell, who said he has lived in Aurora his entire life, hoped the industrial park project is successful.

“This announcement means a lot to me,” he said. “We don’t have nothing here but our little old gas station. We need a grocery store. We have to drive to places like Washington and New Bern to get our groceries right now. Having this industrial site and new jobs and people could attract a grocery store to town, and that would mean more jobs and people. Everybody is going to Greenville for jobs. There’s nothing to keep people here. They just go somewhere else right now.”

“This project is important number one, because of job availability,” he said. “A lot of my peers over the years have moved away for college and for jobs. There has really been nothing here to make them want to stay here.”

Added Peed, “There have been efforts before to try and rejuvenate the Town of Aurora, but they didn’t work. This latest effort is the best I’ve seen in about 30 years. That is because there is actually outside support from the county, state, and from industry. This really means having an opportunity. That is all we want in Aurora, the opportunity to grow a little.”