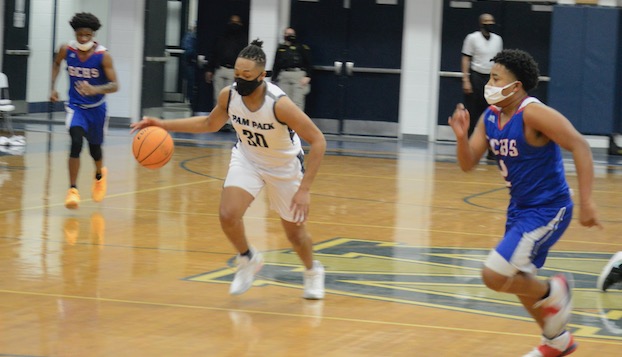 Usually when a conference championship basketball team graduates 10 seniors, expectations are lower the following season. That’s not the case for the Washington High School boys.

The Pam Pack went 10-3 and won the Eastern Plains Conference with a 7-1 record during the COVID-19 delayed and shortened 20-21 season that didn’t actually start until January of this year. They made it to the third round of the 2A state playoffs, but return only three players who averaged just 19 of the Pack’s 68 points per contest.

Even that stat is misleading because Terry Moore will graduate early and take his 15 points a game to Duke University in January to play college football.

That leaves Messiah Ebron (1.9) and Ashton Woolard (1.7) as the leading returning scorers.

However, second-year coach David Allewalt isn’t worried at all.

“It sounds like more of a rebuild than it actually is,” Allewalt said. “Our JV team was 12-0 last year and we have experienced seniors in Hayes Pippin and Ridge Zerniak to step in from that team along with some very talented young players. From what I’ve seen so far, we’ll be fine.”

As talented as Moore is, some coaches would prefer to not disrupt the starting lineup just as the conference season begins. Allewalt is not one of them.

“Terry is a great athlete, a tremendous student and an outstanding person,” he said. “He’s earned the right to finish his career the way he wants to and he will obviously help us while he’s here. He is a fierce competitor and an outstanding leader. I’m hoping those traits will carry over to others after he’s gone.”

Allewalt is counting on sophomores Jerai Davenport, Jaylen Lampkins, Zymarious Perry and Gary Payne to emerge as scoring threats in the Pam Pack’s up-tempo offense. He also expects freshman Javon Williams to make an impact on a nightly basis.

“He is going to be a really good player before he’s finished here,” Allewalt said of the 6’3 freshman from Chocowinity Middle School. He, Davenport and Lampkins will give us multiple outside threats, while Perry and Payne (6’4) will give us an inside presence we didn’t have last year. We plan to rebound better than last year and push the ball up the floor.”

The biggest change in the newly realigned conference is that the Pam Pack will get to face three-time defending state champion Farmville Central twice during the regular season. The Jaguars visit WHS to open the 2022 portion of the schedule Jan. 4.

“I love it,” Allewalt said. “I’ll take any chance we have to compete against an elite program. It helps us get better and grow as a team.”