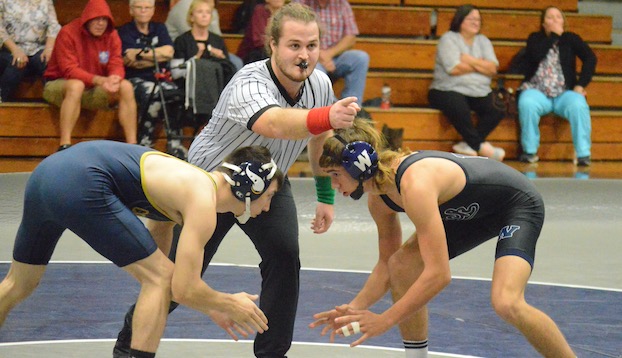 High school wrestling, like other sports, has returned to its natural place on the sports calendar after a delayed, curtailed campaign because of COVID-19.

The was no dual team state championship last year and in-season tournaments weren’t held. Teams were limited to dual matches only and far fewer than in past seasons.

This winter, Washington High School’s wrestling squad has a full complement of dual matches with several in-season weekend tournaments to prepare for post-season competition that starts in January.

The only odd thing on the schedule is the lack of home matches-three to be exact, with one already in the books and another scheduled for Wednesday night.

It’s always been tough to get other teams to come here since I’ve been here,” eighth year head coach Chris Penhollow said. “I think part of it is we are so far east that other 2A schools don’t want to make the trip and the bigger 3A and 4A teams don’t want to take a chance on losing to a 2A school. It’s really no different than it’s been in the past, so we are used to it.”

The Pam Pack is off to a 4-3 start with a pair of losses to 4A D.H. Conley and one to conference foe, West Craven, in the most recent match last week. The victories have come against Northern Nash, C.B. Aycock, Manteo and Greene Central.

However, Penhollow will have a full roster for each match going forward since football season is over.

“I gave our football guys last week off to rest their bodies and get mentally prepared to wrestle,” Penhollow said. “We’ve been giving up five forfeits every match because we haven’t had a full team, so I think we’ve done well given that. It will be nice to have everyone available the rest of the way.”

Among those available are seniors Isaac Campbell at 132 lbs. and Zack Warren at 120.  Bryant Smith returns at 152 and Braxton Woolard returns at 120 also.

All four qualified for the individual state tournament last spring and Penhollow expects them to return with others in tow.

“We have several guys who have a chance if they continue to work hard,” Penhollow said. “We also have several freshmen who didn’t wrestle last year at P.S. Jones because of the virus. It’s good that we are back to normal with our schedule so these guys can develop.”

Among the new faces is 160 lb. senior Bobby Silverthorne, who is part of the team for the first time. He’s off to a 5-0 start with all five victories by pin.

“Isaac has been talking to him about joining us for a while now, but he’s always had to work after school,” Penhollow said. “His family gave him permission to compete as a senior and he’s done great so far.”