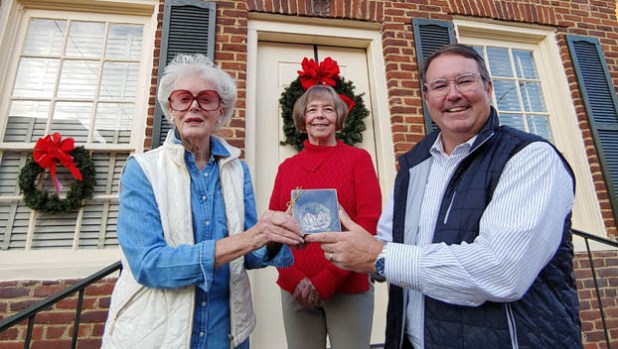 Attorney Will Mayo, Jr., the third generation of his family’s law practice, received the first of this year’s prized Christmas ornaments, a mini-replica of his family’s law office chosen and designed by the Washington Area Historic Foundation. Joining him from WAHF are, from left to right, the group’s vice president Dee Congleton and treasurer Betty Jane Green. (Karen Thiel) 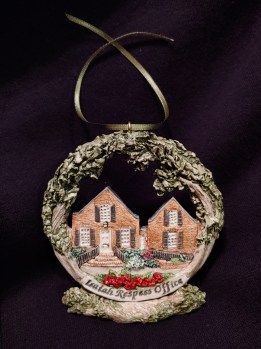 This year’s presentation of the beloved architectural Christmas ornaments chosen by the Washington Area Historic Foundation is an ode to the past and a celebration of the present. The group’s choice features the Isaiah Respess office on Second Street.

The foundation has offered custom-crafted, hand-painted ornaments honoring historic town sites since 1996 – with the exception of last year, when pandemic-related restrictions prevented production. WAHF president Donald Stroud said that this year’s offering marks a quarter century of the group’s efforts, on behalf of Washington’s history, to “honor structures of the past and promote their preservation.”

The Respess House has been located on Second Street since the 1830s, initially where the magistrate’s office is today. Original owner Isaiah Respess used it as his office when he was mayor of Washington during the Civil War, before being arrested for fraternizing with Union forces that had occupied the town. The building served as a school and a funeral parlor over the years and, for the last three generations has housed the Mayo Law Firm. The house was moved to the corner of Second and Market streets in the 1960s, when William P. Mayo, Sr. “struck an agreement with town leaders, trading property lots so there would be enough room on Second Street to build the new court house,” according to his son, Will Mayo, Jr., who now runs the firm.

WAHF Vice President Dee Congleton said this year’s choice was easy because the building is “a significant example of traditional federal commercial architecture” featuring a simple square or rectangular box shape, two or three stories high and two rooms deep. As with similar structures, the Respess building eventually received an addition, completed with bricks meticulously chosen to match the originals.

Mayo said his father, who died last year, “would have been honored, but he did not like attention. He would have thought there would be somebody else more deserving of recognition than him… but would never refuse attention in terms of the ornament being used for this cause.”

Along with funds from the WAHF’s annual Spring Home Tour, earnings from the sale of this year’s Christmas ornament are used to provide maintenance for Harding Square and the many hand crafted honor plaques on restored homes in Washington’s two historic districts. The ornaments cost $25 and include a display stand as well as a chord for hanging from Christmas trees. They are available at the North Carolina Estuarium, 223 East Water St., at the edge of Mac Hodges Festival Park.