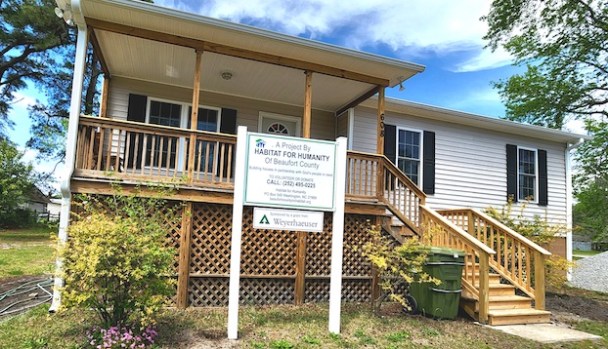 RESURRECTION TIME Renovations are in process at this Havens Street home, which was built in 2011 by the Beaufort County chapter of Habitat for Humanity, has been vacant for years, and is now being refurbished with the help of a dedicated group of volunteers as well as a grant from the Weyerhaeuser Company. (Karen Thiel/for the Washington Daily News) 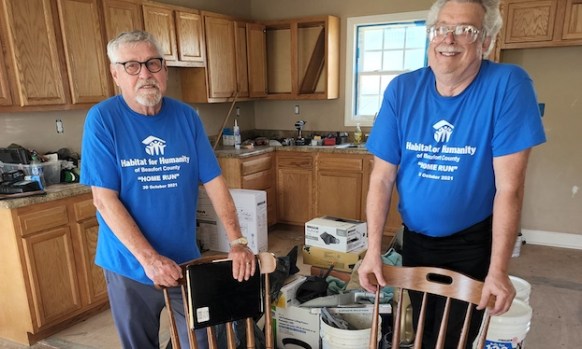 GREAT EXPECTATIONS Board member Butch Strickland, at left, and board president Feryl Master, at right, in the kitchen of a home on Havens Street, confirmed their excitement and expectation for the potential in the work being done to restore that house. Master said a new family is already in the process of becoming the next owners, benefiting from the work of this local chapter of Habitat for Humanity and gaining the kind of housing that the international group has created for millions of people since 1976. (Karen Thiel/for the Washington Daily News)

A house on Havens Street has become a symbol of renewal for members of Beaufort County’s chapter of Habitat for Humanity, which built the structure in 2011 and just received a grant that enables its renovation. Board members doing much of the actual work say the house is also symbolic of what is happening in this local chapter. Washington resident and new board member Butch Strickland said, this week, that the spring-season timing of a $15,000 grant from the Weyerhaeuser Company is the equivalent of a divine non-coincidence, and has brought new life to the group as well as the renovation effort. “We are both being resurrected,” he said.

The project is part of Habitat for Humanity’s “mission vision” to “create opportunities for all people to live in decent durable shelter… to demonstrate the love and teachings of Jesus, acting in all ways (to) be the ‘hands and feet’ of that love and grace in our world.” Houses have been built and mortgages given to more than 39 million people worldwide by independently run Habitat chapters since 1976, all committed to “a world where every person has something to contribute and something to gain from creating communities in which all people have decent, affordable places to live.”

Washington’s chapter held to the group’s in-depth approval process for the family that eventually lived there, including classes about mortgages, personal finances, home ownership, maintenance and upkeep. The candidates also contributed “sweat equity” to help build the house, eventually receiving an interest-free mortgage from the local chapter. Board of Directors president Feryl Master said the financial relationship dissolved due to repeated nonpayment and noncompliance issues. The family left and the home, which had not been well cared for, became unsafe during its vacancy.

The chapter itself was also suffering, having lost several members since its founding in 1989. Efforts to continue their outreach – which had produced 25 new homes for area families – languished until Master became the board of directors’ vice president. He has attracted over a dozen newcomers to that board, who work on finance, public relations, fundraising, and new owner support – then regularly join the renovation volunteers and construction supervisors now working at the house.

Master said this project is the most advanced of three now in process. “We will be building for the next couple of years,” he said of the sites, including one “just northeast of town” and another at Blounts Creek. He added gratitude for help he anticipates from town leaders who have previously offered utility tie-ins, curb cut-outs for new driveways, and other assistance at no cost to the Habitat chapter, which finances every project with funds contributed to its 501(c)(3) nonprofit fund.

Standing on the home’s porch this week, Master and Strickland looked like new homeowners as they described renovations and innovations planned for the three-bedroom, two-bathroom structure that is walking distance from Havens Gardens and the Pamlico River. “I can already see a mom sitting on this porch and watching her kids play in the yard,” Strickland said, as they surveyed blooming yard bushes and smiled at the possibilities-for their new chapter members and volunteers as well as the homes’ new owners.

Habitat for Humanity of Beaufort County meets at 6:30 p.m. on the second Monday of each month at St. Peter’s Episcopal Church, 101 Bonner Street, in Washington. Anyone interested in volunteering or donating to the group may leave a voice mail message at 252-975-1750.