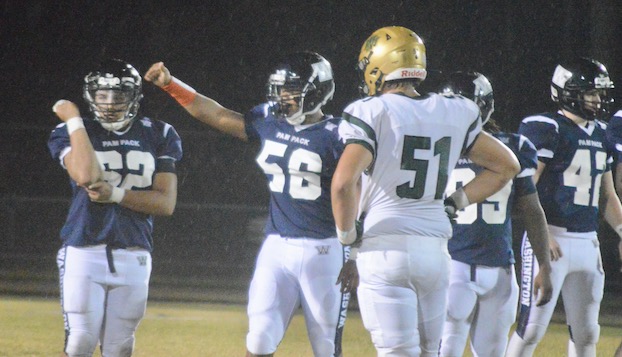 Washington High School enters its second football season in the realigned Eastern Plains 2A Conference charged with maintaining its high-octane offense with new personnel against 10 opponents eager to derail that effort.

When the new season kicks off August 19 at Pamlico County, the Pack will have a new quarterback in junior Spencer Davenport and a pair of new running backs, juniors Gary Payne and Josh Gordon.

The trio takes over for two of the most dynamic players in recent school history, quarterback Hayes Pippin and tailback Terry Moore, who led the offense to record point production the past two seasons.

“These guys are very capable of leading our offense, they just haven’t had the varsity experience,” coach Perry Owens said. “Spencer didn’t lose a JV game in two years as the starting quarterback and Josh was right there with him. Gary helped the varsity on defense last year, so we are in good shape.”

Northampton is the opponent for the home opener Aug. 26, followed by another home game against South Central. After a bye week Sept. 9, the Pack hosts Eastern Wayne before starting conference action at West Craven Sept. 23.

“Each opponent gives us a different look,” Owens said. “The schedule got out of whack last year, so we didn’t end up playing South Central. They have a new coach, as does Pamlico, and run the Air Raid offense, which will challenge us defensively. Eastern Wayne will be the prime-time non-conference opponent because they are really big and athletic. West Craven beat us out for the conference title last year, so that game will be big again. SouthWest Edgecombe will be tough at their place and everybody will push us. It’s a good schedule for the team we have and our strength of schedule should put us in position for a favorable playoff seed.”

WHS went 10-3 overall and 5-1 in the league last year, with the only loss to West Craven. They made it to the third round of the 2A playoffs.