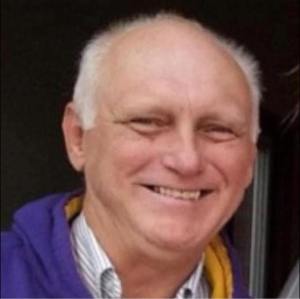 Milburn “Ray” Hudnell, Jr., age 69, a resident of Wilson, NC passed away unexpectedly at his home on Wednesday, September 7, 2022.

Graveside services will be held at 3:00 PM Monday, September 12, 2022, at Belhaven Community Cemetery. The family will greet friends from 1:00 PM until 2:30 at Paul Funeral Home in Belhaven.

Ray was born September 23, 1952, in Belhaven, NC to the late Milburn and Mary Ann Hudnell. He graduated from John A. Wilkinson High School 1971, East Carolina University in 1975 and retired from the Wilson County Health Department in 2006 as the Supervisor of Environmental Health Services as a Registered Sanitarian.

He met the love of his life, Stephanie, while visiting family in Virginia in 1974 and three months later they were wed. They made their home in Wilson, NC where they raised their only child, Nicole Hudnell Johnson of De Pere WI. Nicole and his grandchildren, Kayla, Caroline and Bennett were the apples of his eye. Just hearing their voices over the phone would bring a hearty laugh and a round of “I love you”.

After his retirement, Ray volunteered with the Veteran’s Administration transporting veterans to their doctor appointments and worked part time at the Wilson Landfill. In the last years of his life, he could be found listening to oldies with his beloved dogs Petey and Patty, by his side or at the Moose Lodge singing Karaoke and dancing with his friends. Ray had a great sense of humor and loved watching sitcom reruns of Andy Griffith and Everybody Loves Raymond. He was a member of Shiloh Pentecostal Holiness Church in Wilson.

Ray was a self-proclaimed “WWII buff”. He loved to read and collect all things military with an emphasis on WWII owing to his father serving in the war and being present on land for the bombing of Pearl Harbor. He always wanted to serve but was unable to because of chronic health problems so instead he participated in the ROTC in high school and college.

He was preceded in death by his parents, a sister, Juanita Spencer and his mother-in-law, Grace Madden.

Ray’s laugh was infectious, and his strong love is still felt from beyond. Go rest high, Daddy. We’ll take it from here.

Stephanie and Nicole would like to thank cousin-Robin Keech, brother and sister-in-law Billy and Lee Madden and friends Ellen and Marc Goldberg for all their continued love and support during this very difficult time.

Paul Funeral Home of Belhaven is honored to serve the Hudnell family.