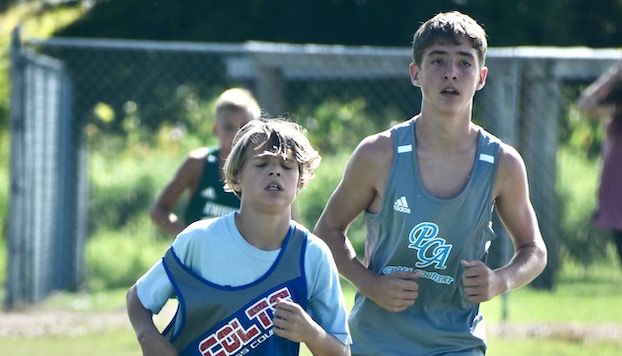 The Raiders had a school-record cross country performance and reeled off four straight volleyball victories after senior Regan Stoop returned from her ankle injury.

Cross Country: Sophomore Luke Rouse won his first ever Tar Heel Independent Conference Cross Country meet Monday with a school record and personal best time of 19:40 over the 5k course at Lawrence Academy. Rouse previously held the record with a time of 20:03. Junior Ginny Pugh placed fifth in the girls race in 28:47, while 8th-grader Emily Copes was 10th in 30:30.

Soccer: The Raiders welcomed Columbia High School on Tuesday in their lone match of the week. Davis Lee scored four goals to bring his season total to 19, in a 7 – 0 victory. Brandon Tooley, Bruce Taylor and Bo Spencer also scored for the Raiders. Pungo is 6 – 2 on the season and has won five straight. PCA has a home/home series with Mattamuskeet this week.

Volleyball: The Lady Raiders are on a roll after picking up four more wins.  Pungo prevailed 25-10, 25-4 and 25-12 at Halifax Academy. Reagan Stoop led the way with 15 kills while Autumn Gibbs added 9. Abbey Cutler and Stoop each had 5 aces on the day while Anna Stoop added 22 assists in the match.

Next the Raiders hosted Albemarle School in a rematch of last year’s 1A state title game. The Raiders pulled through in a back and forth first set 25 – 20. In the second, Albemarle seemed to be in good shape to hand the Raiders their first set loss at home, but PCA clawed back from a seven point deficit to win 26 – 24. Pungo put things away cleanly in the third with a 25 – 16 victory, giving the top-ranked Colts their first loss. Reagan Stoop led all players with 17 kills. Abbey Cutler added five aces and Anna Stoop contributed 26 assists.

Thursday Pungo traveled to Merry Hill to face the 5th ranked Lawrence Academy Warriors. PCA kept its momentum rolling with a 3 – 0 victory (25-15, 25-15, 25-14). Reagan Stoop added 23 kills and 22 digs while sister Anna Stoop added a career high 36 assists, which is the second most assists in a game in school history.

Monday the Raiders extended their winning streak to 8 games with a decisive victory over Oakwood School (25-8, 25-20, 25-10). Reagan Stoop had 12 kills while fellow seniors Abbey Cutler and Ashley Williford had six each. Anna Stoop added 29 assists. Reagan Stoop is now 79 kills away from being the first Raider to eclipse 1,000 in a career. She leads the NCISAA 1A with 172 kills, despite missing six games with an ankle injury. Her sister Anna, also leads the NCISAA in assists with 330 on the year. The Raiders (15-4, 4-0) travel to Albemarle on Thursday.

Tennis: PCA was unable to hold its momentum from last week’s victory over John Paul II, losing to Oakwood and Northeast Academy this week. Juniors Kaitlyn Williamson (4) and Reese Blackman (5) picked up their third wins against Northeast. 8thGrader Juliette Pence picked up her first career singles win as well. The Williamson/Pence duo continued to be the Raiders consistent doubles team, winning their team-leading third doubles match. The Raiders travel to Lawrence Academy and Kerr Vance Academy this week.

Football: PCA didn’t play Friday because Columbia HS cancelled the rest of their season. The Raiders also won’t play Bethel Academy because of a lack of healthy players, but picked up a second game with Mattamuskeet to replace. PCA will host Mattamuskeet again on October 14th at 4 p.m. The Raiders will be back in action this week vs Northeast Academy at home also at 4 p.m.