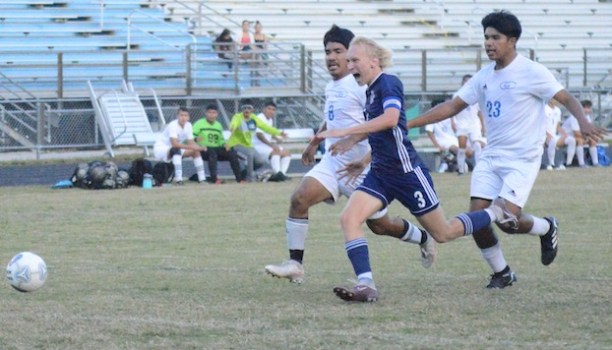 Senior Luke Brown goes all out for the ball during the Pam Pack’s match against Greene Central. (Steve Barnes/Washington Daily News) 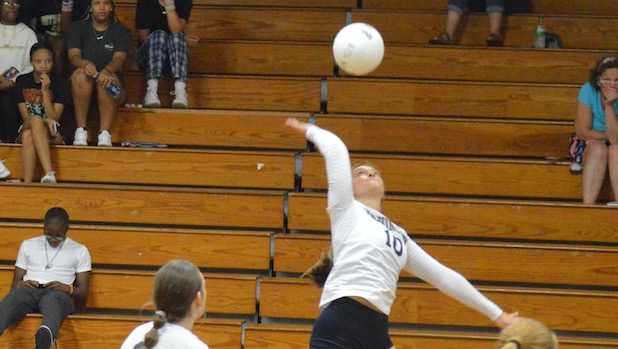 Washington’s volleyball and soccer teams had a chance to claim first place this week, while Northside volleyball and Southside soccer continued their strong seasons.

“It’s the best we’ve played all year, despite the loss,” coach Kim Rogers said. “We started strong and led several times, but made little mistakes at the wrong time. We served, communicated and moved better, but we missed some coverages. They (Ayden-Grifton) are always good and there’s plenty of positive things to take away.”

Southside (0-10) continues to rebuild after losses to Lejeune and East Carteret.

Soccer: The Pam Pack lost, 2-1, to Greene Central in a hotly contested home match Wednesday.  Freshman Hector Olivares’ goal midway through the first half gave WHS a 1-0 lead, but the Rams answered with two quick scores less than a minute apart early in the second half.

“We proved we could compete with one of the best teams in the state for 77 minutes, but lost the match with three bad minutes,” coach Jim Kozuch said. “They (Greene Central) definitely turned up the heat coming out of halftime and we weren’t ready. Our defense played well other than that stretch and we competed hard.”

Southside (9-2) won its only match, 3-0, at West Craven Monday behind goals from Kenny Avila, Gabe Matthews and Jonatan Trevino-Perez. Avila leads the seahawks with 12 goals and seven assists. Matthews has 10 goals and 11 assists and Pedro Chavez-Pullman has seven. Southside is at Bear Grass Monday.

Tennis: Washington is in second place in the EPC at 7-1 and 9-2 overall after Thursday’s 9-0 sweep of Farmville Central. Perennial power Greene Central is at the top undefeated. The Pack won, 9-0, at West Craven Monday and 5-4 at Northeastern of Elizabeth City Tuesday.

Sophomore Avery Thomas is 10-1 at #5 singles, with the top doubles team of Katherine Pollock/Addison Gibbs and the #2 doubles team of Thomas/Ana Roberson are 8-2. The Pack travels to Greene Central Tuesday with a chance to tie for the league lead.

Golf: WHS lost to West Craven, 107-111 in the only match this week at the Washington Yacht & Country Club. Lilly Davis led the Pack with a 55 while Mary Page Moore shot a 56.