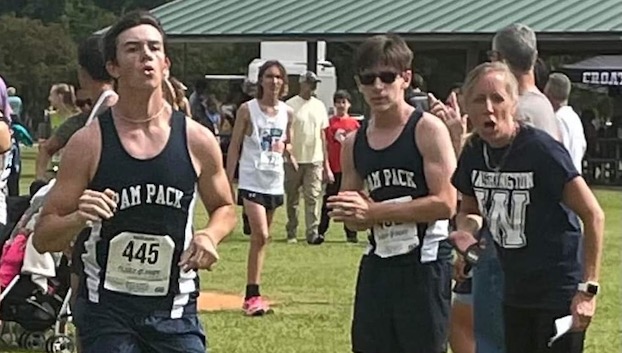 Well over 300 girls and boys cross country runners converged on D.H. Conley HS in Winterville for the 18th edition of the Bo Run, a 5K fundraiser named in memory of former Vikings cross country captain and baseball player, Bo Thompson, who was killed in an auto accident coming home from a school football game.

“We have competed almost, if not every, year they’ve held this event,” WHS coach Dawn Landen said. “We were running in it before I started in 2011 and I’ve heard about it before that. The competition is outstanding as teams from all around the East and a few from the Raleigh area are here, the course is outstanding and very well maintained, the weather is cooler since we run in the morning and it’s a great way to support another school’s fundraising efforts.”

Both the boys and girls had an invitational and a separate championship 5K race.

Northside sophomore Andrew Harding finished ninth in the boys championship in 16:46.41, while teammate Mason Newman was ninth in the invitational in 18:22.68.

Junior Hailey Broadwell was 17th in the girls invitational in 23:29.21, while sophomore Jessica Conner finished 20th in 23:42.99. Lydia Smith, Reagan Fisher, Avery Thomas and Jasmine Figueroa also competed as the girls finished fifth out of six in the team competition.