Pitt County, NC – On September 26, 2022, detectives with the Pitt County Sheriff’s Office Major Crimes Unit discovered that a registered sex offender may have been at the American Legion Fair that was recently held in Pitt County. 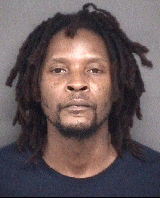 During the resulting investigation, it was determined that 44-year-old Eddie D. Gay of Greenville, who is a registered sex offender in Pitt County, did attend the American Legion Fair.  Gay entered the fair on Friday, September 23, 2022 at 5:06 PM and remained on the premises until departing at 6:36 PM.

Detectives obtained a warrant for Gay’s arrest, charging him with one felony count of Sex Offender/Child Premises, NCGS 14-208.18(A).  Gay was arrested on Monday, September 26, and transported to the Pitt County Detention Center.  He appeared before a Magistrate who set a bond at $5,000 secured.  He was released after posting bond.

This is believed to be an isolated incident with no threat to the public occurring during the time of violation.